In a bid to sustain partnership and coalition building in the fight against corruption, the Sub-regional Office of the Anti-Corruption Commission (ACC) in Kono has met with the Ministry of Social Welfare in the District in a bid to strengthen their partnership in the fight against corruption. The meeting took place on Wednesday 23rd June 2021 at the Office of the Ministry of Social Welfare, Yardu Road, Koidu City, Kono District.

Explaining the significance of the engagement, Public Education Officer of the ACC, Sam P. Gogra, said partnership and collaboration among institutions providing both financial and essential social services is vital to tackling incidences of corruption in the public sector.

He said every public institution should have a functional Integrity Management Committee (IMC) responsible for identifying corruption opportunities and proffering recommendations for addressing and preventing them.

Mr. Gogra made reference to the many strides made by the Commission in the fight against the menace ranging from massive public education campaigns, systems and processes reviews of Ministries, Departments and Agencies (MDAs), development of citizens’ service delivery charters and the assets declaration regime, and investigation and prosecution of officials suspected of committing acts of corruption. All these efforts, he said, have led to the recovery of over Thirty Billion Leones and other physical assets, and a very high conviction rate over the years.

ACC Public Education Officer, Hawa Deen Conteh, in her submission, said the ACC is only leading the fight against corruption and therefore needs the cooperation and collaboration of all MDAs in confronting the scourge.

She reminded her audience that so many Sierra Leoneans will suffer when corruption takes a center stage and therefore encouraged them not to celebrate the corrupt but rather report them to the ACC for swift action. ''Let me inform you that our main message is for you to resist, reject and report corruption to the ACC using the toll-free lines of 515 (Orange and Africell), 077-985-985 or 077-986-986,'' she concluded.

Senior Investigation Officer ACC, Alpha G. Koroma, explained that one key reason why the ACC is gaining huge commendation from the public hinges on its insistence on enforcing the provisions of the Anti-Corruption Act of 2008 as amended in 2019.

He warned that each of these offences attracts a fine of not less than Fifty Million Leones or five years imprisonment or both such fine and imprisonment. He therefore encouraged the Ministry of Social Welfare staff to always shy away from corrupt practices.

Earlier in his welcome address, the District Social Services Officer Joseph Kai thanked the ACC for organizing the engagement, adding that his staff at the Ministry believe in the work of the Commission, especially with regards, the many achievements it has made under the present leadership.

He assured the Commission of their support and cooperation and promised to mainstream corruption control measures that will eliminate incidences and opportunities of corruption in their operations.

The partnership engagement was climaxed by a question-and-answer session and the distribution of IEC materials. 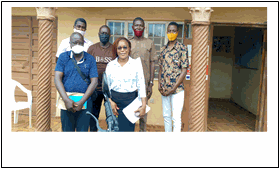