The public may recall that sometime in August 2019, the Anti-Corruption Commission (ACC) commenced investigation into an allegation relating to corrupt acquisition of wealth by the State Chief of Protocol and Ambassador-at-Large, Mrs. Fatmata Edna Kargbo, which was prompted by a social media video in which, Mrs. Fatmata Edna Kargbo was seen giving testimony at the Church of Prophet T. B. Joshua, the Synagogue Church of All Nations, in Nigeria, where she did a powerpoint presentation on a house she completed constructing following her appointment as State Chief of Protocol and Ambassador-at-Large.

Based on the above, the matter was carefully and dispassionately investigated and our findings reveal that Fatmata Edna Kargbo has served the Government of Sierra Leone for about twenty (20) years in the Ministry of Foreign Affairs and International Cooperation. She served on Foreign Missions in The Gambia from 2007 to 2012 and in Ghana from 2016 to 2018; during which time she was being paid in United States Dollars. It was established that she later rose to the rank of Permanent Secretary in the Civil Service, during which time she was posted to The Office of the President as State Chief of Protocol (SCOP) and Ambassador-at-Large.

The Commission requested and obtained the payroll schedule from the Accountant General’s Department in respect of Fatmata Edna Kargbo’s twenty (20) years of service in the Ministry of Foreign Affairs. It was established that her total emolument for the period amounted to Three Billion, Two Hundred and Ninety Million, One Hundred and Eighty One Thousand, Six Hundred and Fifty Eight Leones (Le 3,290,181,658.00).

Our findings also reveal that, she owns a property situated at No. 5 Josiah Drive, Hill Station which is the same property that was in the said video on social media in August 2019. However, this property was declared in her Asset Declaration to the ACC in 2014 as ‘unfinished’ and she continued declaring same in subsequent years (though intermittent). This negates the allegation that she built the house after her appointment as State Chief of Protocol and Ambassador-at- Large in 2018. The house was in advance stages of construction as at the time of her said recent appointment; though she continued finishing work on it throughout.

A Valuation was done by qualified and reliable Valuers on the property situated at No. 5 Josiah Drive, Hill Station. The said valuation was done by two Technical Personnel from the Ministry of Works and Public Assets working with ACC investigators. The said property was valued at Three Billion, Two Hundred and Twelve Million, Two Hundred and Forty Five Thousand Leones (Le 3,212,245,000).  However, when the value of her house was deducted from her total emolument for the period she has worked as stated above, there is a surplus of Seventy Seven Million, Nine Hundred and Thirty Six Thousand, Six Hundred and Fifty Eight Leones (Le77,936,658.00). She also confirmed doing some other businesses and sources of funds that supplemented her lifestyle like petty businesses with her office colleagues while in Ghana and received various allowances and travel per diem.

In light of the above, no corruption offences have been established against Madam Fatmata Edna Kargbo that may warrant prosecutorial consideration. However, her conduct as a public officer in an office that is within the Presidency, whereby she is seen ostensibly referencing the construction of her house and displaying her appointment letters so as to draw a connection with same was ill-advised, and may require administrative reprimand and sanction.

In conclusion, after a thorough investigation of the issue, our findings are that her earnings, spanning over the twenty (20) years in the Civil Service, are commensurate to the value of the property in question and not beyond her means. The ACC further did not establish that she owns any other realty apart from the single dwelling house she has built and in which she now resides after twenty (20) years of public service. Therefore, the Commission defers to the President’s administrative action, hitherto or to be, taken on this issue.

The Commission is very grateful to the Office of the Secretary to the President and the Presidency for their cooperation during our investigations. Also, the ACC thanks the Public for their interest and patience while it diligently probed into this issue which had generated huge public concern.

For further enquiries on this and other ACC matters, please contact MARGARET MURRAY, Public Relations Officer, on +232-78-832131 or via email info@anticorruption.gov.sl. 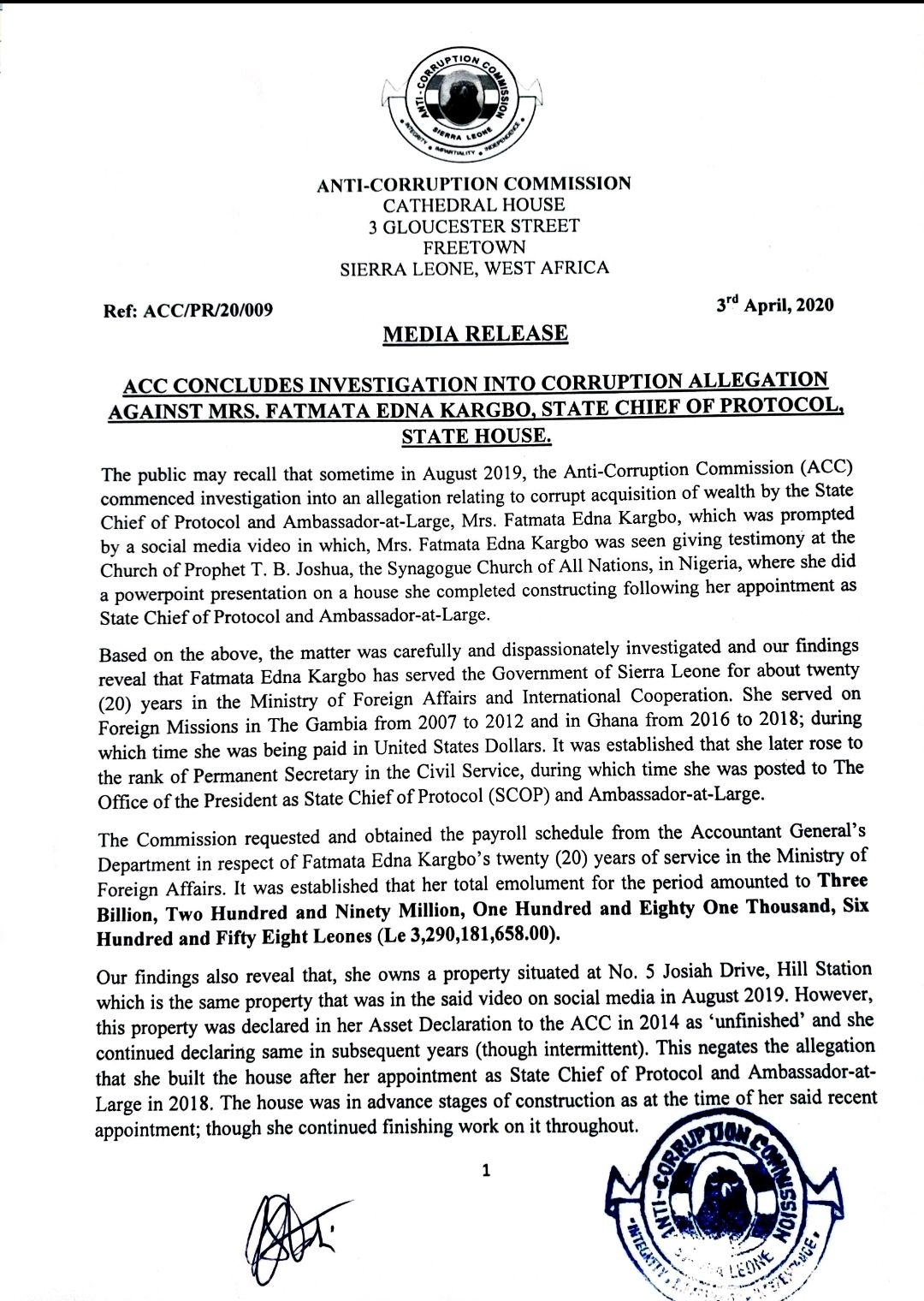 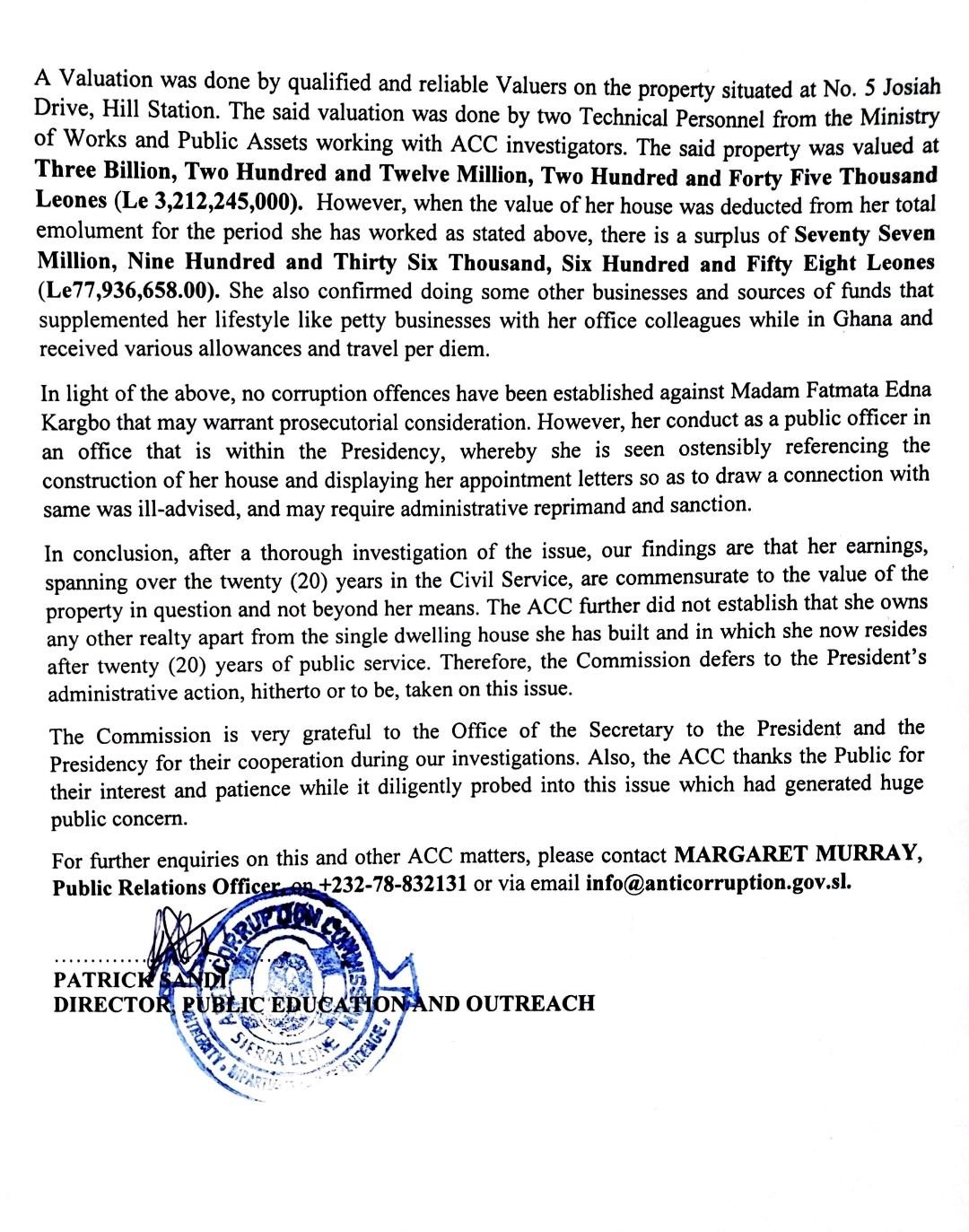