ACC CONCLUDES INVESTIGATION OF “BRIBE” STATEMENT BY THE GOVERNOR OF BANK OF SIERRA LEONE TO PARLIAMENT.

The Anti-Corruption Commission (ACC) wishes to inform the general public that it has concluded investigation of the Governor of the Bank of Sierra Leone (BSL), Professor Kelfala Morana Kallon over remarks he made at a pre-legislation presentation to Parliament on the 22nd November, 2021, in which he said, he “bribed” people who were hoarding the Leone to bring it back into the banking system in the total sum of Sixty-eight Million US Dollars (USD$ 68,000,000).

The ACC opened a full investigations into the financial dealings of the BSL beyond the statement and forensic investigation confirmed the following:

i.                    That in a meeting held in December 2020, the Governorsagreed that, in order to mop-up excess Leones liquidity outside the banking system, the BSL apply foreign exchange sales operations. This was after the Bank Governor had noticed that the vaults of the Commercial Banks were dangerously empty, which had resulted in a huge drop in the deposit of Leone notes by Commercial Banks into the BSL Account.

ii.                  That on the 14th January, 2020 BSL sent out Notices to Fourteen (14) Commercial Banks registered in Sierra Leone, expressing interest for the sale of foreign currency (US Dollars) in exchange for Leone deposits for the purpose of mobilizing the Leone into the banking system.

v.                  That all Commercial Banks involved in the foreign exchange sales operation produced evidence of deposit slips to us at the ACC indicating the total amount of Leone notes credited to BSL Account Number 1200095 being equivalent in Leones of the US Dollars purchased from BSL.

Based on the foregoing, the Commission concludes that, even though the Bank Governor, Professor Kelfala M. Kallon, openly said he “bribe Commercial Banks” in his attempt to explain what had been done to revitalize the banking system, the said statement was a mischaracterization of what transpired and the use of the word “bribe” in that context was in error as the Professor struggled to simplify a complex banking operation. After several days of questioning him and various staff at the BSL, with evidence obtained from all concerned including the Commercial Banks, and forensic examination of the financial and operational records of the Bank of Sierra Leone, is that he was referring to the “Cash Swap” Operations conducted by BSL as explained above. He has been therefore advised to choose his words more carefully next time so as not to create the wrong impression for the public; as we all continue to work robustly to ensure that accountability and transparency continue to guide the Public Service of Sierra Leone.

The Commission has accordingly closed this investigation.

For further enquiries on this and other ACC matters, please contact Sylvanus Blake, Assistant Public Relations Officer on +232-78-832131 or via email info@anticorruption.gov.sl. 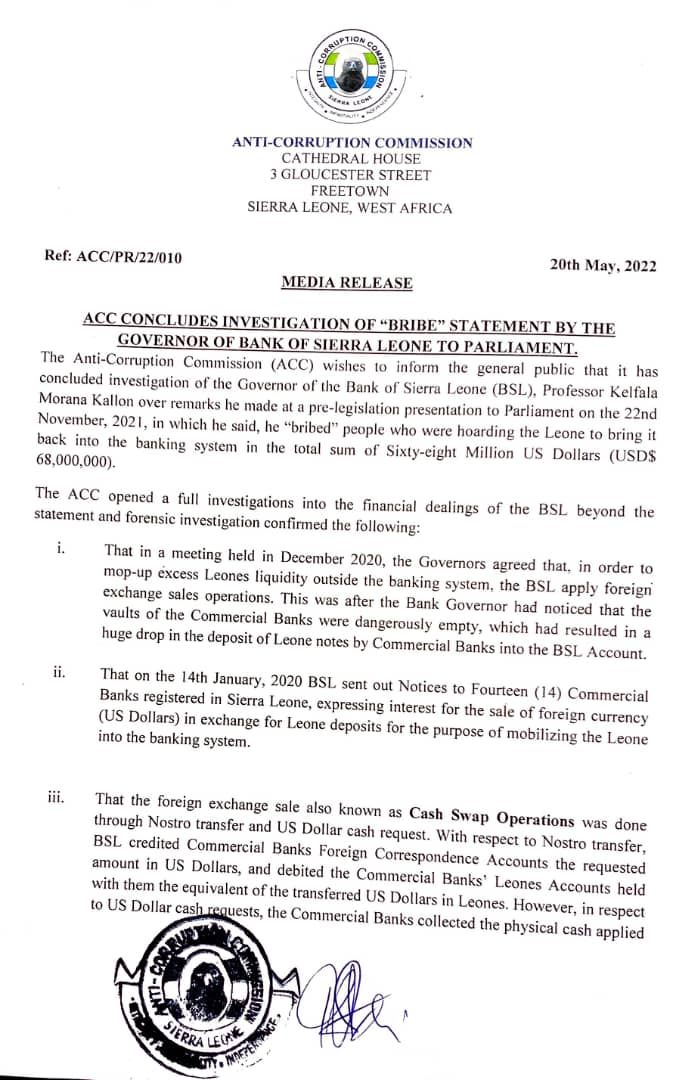 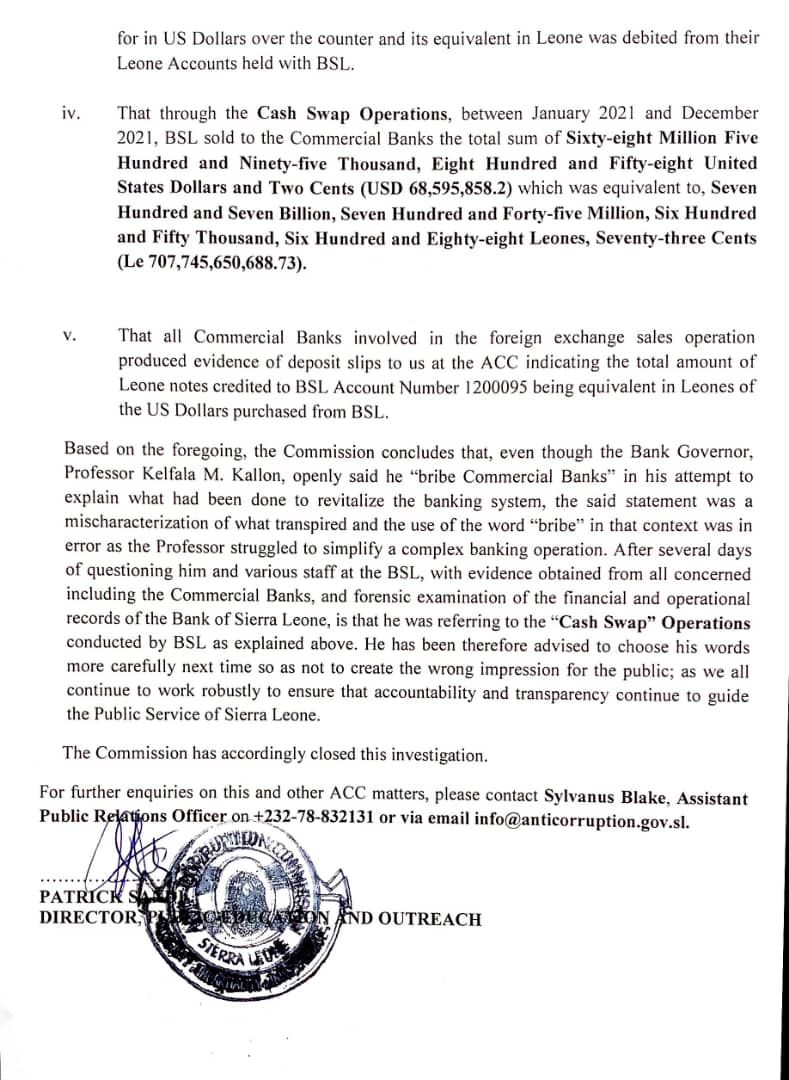