ACC ENQUIRES INTO ALLEGATIONS OF CORRUPTION AGAINST CHIEF MINISTER

In light ofrecent allegations of corruption against the Chief Minister, Professor David John Francis, the Anti-Corruption Commission (ACC) wishes to inform the general public that it has accordingly taken appropriate action. Professor Francis himself contacted the Commissionfollowing a text message he received from Sallieu Tejan-Jalloh, Managing Editor of The Times Sierra Leone Newspaper, alleging that a total of US$1.5M was paid into his Eco bank account as bribes.

TheChief Minster, acting in accordance with Section 77 of the Anti-Corruption Act 2008,which imposes a duty on all public officers to report where a corruption offence has been committed; or is about to be committed, accordingly informed the Commission.

Acting in consonance with Section 7(1)(b) of the Anti-Corruption Act 2008, which mandates the Commission “to investigate instances of alleged or suspected corruption referred to it by any person or authority or which has come to its attention, whether by complaint or otherwise,” the ACC accordingly contacted Mr. Jalloh to help with information to aid an investigation. Unfortunately, Mr. Jalloh refused to comply with the request of the Commission.

However, the ACC issued a Section 57(2) Notice, compelling the Eco bank to submit to the Commission all financial records and transactions of the Chief Minister. In its response, Eco bank clarified that “Professor David John Francis does not maintain any account with the Bank.”  Yet, Eco bank maintained that Professor Francis has an Eco bank Cash Xpress pre-paid card since August 2019. The said card, according to Eco bank, denominated only in Leones, can be issued to both Eco bank account holders and non-account holders. The investigations also revealed that since he was issued this card, Professor Francis never loaded the said card with cash; and therefore never used it.

Nonetheless, the ACC invites anyone with evidence to pass such to the Commission. By the provisions of Section 82 (1) of the Anti-Corruption Act 2008, where a person discloses to the Commission that a public officer, body corporate or public body is, or has been involved in corruption, he shall incur no civil or criminal liability as a result of such disclosure.

In this light, the Commission wishes to reassure the general public of its determination to continue executing its mandate without fear or favor. For further enquiries on this and other ACC matters, please contact MARGARET MURRAY, the Public Relations Officer on +232-78-832131. 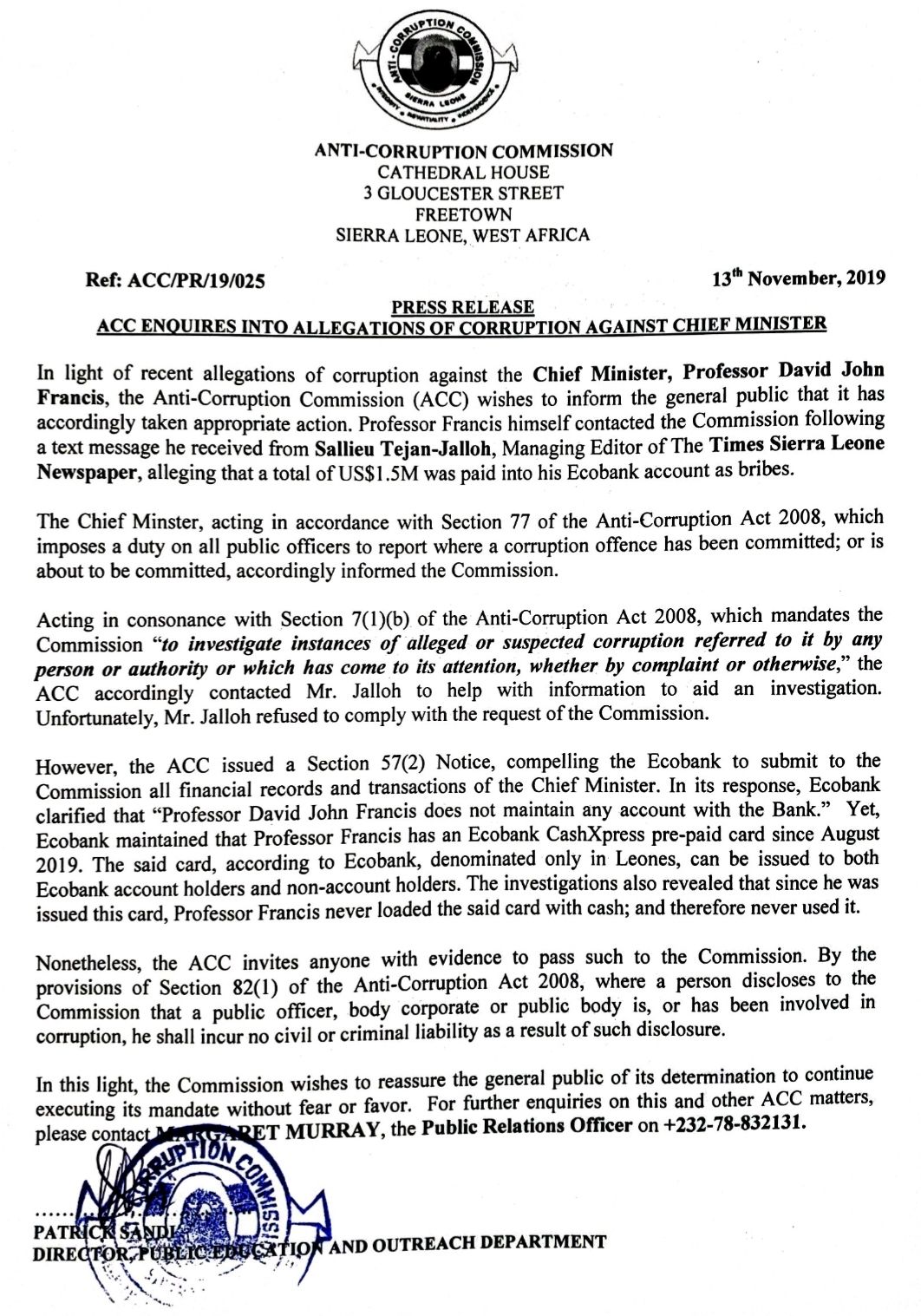