The Anti-Corruption Commission (ACC) wishes to inform the general public that it has entered into a settlement agreement with MESSRS SAMA SESAY, ABDUL MOHAMED KARGBO and JOSEPH CONTEH-Revenue Officers of the National Revenue Authority (NRA) attached to the Immigration Department, to repay the sum of Three Hundred Million Leones (Le 300,000,000), representing the full amount they had been investigated for.

According to the agreement reached with the ACC, as settlement, each of the three NRA staff is required to pay One Hundred Million Leones (Le 100,000,000).

In April 2019, the ACC instituted an investigation into the operations of NRA staff attached to the Immigration Department Headquarters in Freetown following reports that funds generated at the Department were not properly accounted for, as there were variances between the original receipts issued to customers and the duplicate copies maintained by NRA.

Our investigations discovered a long standing corrupt practice known as “carding”; a fraudulent process through which public servants place a card under the original receipt so the actual amount written on it does not get recorded on the duplicate which remains as the actual record of the NRA. They then place a white sheet of paper on the duplicate and write a lesser amount on it. After that, they keep the difference in the amounts on the original and the duplicate receipt to themselves and pay the lesser amount on the duplicate to the state. The amount they keep could be far more than what ends up going to the NRA. The ACC settled this case because the duplicate receipts are illegible and the evidence will be difficult to rely on upon prosecution.

The Commission wishes to further reassure the public that it shall not relent in ensuring that public funds are protected, and where necessary, recovered. 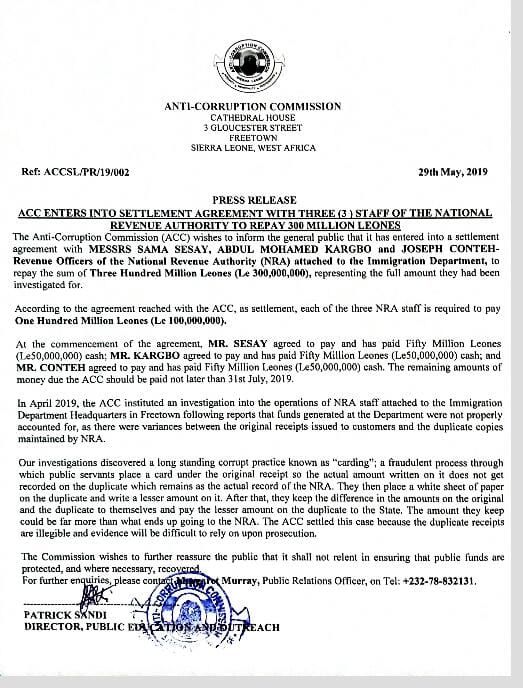