According to the particulars of offence, DANIEL KAPRI SERRY, on diverse dates between 1st February, 2021 and 29th February 2021, peddled influence and accepted an advantage for himself in order to make use of his influence to obtain a benefit from a public body. Between the said dates, DANIEL KAPRI SERRY, accepted the sums of Five Thousand US Dollars (US$5,000), Two Thousand US Dollars (US$2,000) and Three Hundred US Dollars (US$300) respectively for himself from businessmen of CHI CLMENT and SIMPLICE BEDY, in order to make use of his influence to facilitate the release and conveyance to Dubai, United Arab Emirates, of 15 Kilograms of gold valued at US$350,000 (Three Hundred and Fifty Thousand US Dollars). DANIEL KAPRI SERRY also accepted without lawful consideration an IPhone 11 in consideration for him to trace and apprehend one FATMATA BOMPORO SESSAY, a businesswoman involved in the sale of the said 15 Kilogram of gold.

Meanwhile, DANIEL KAPRI SERRY is expected to make his first appearance in the High Court of Sierra Leone Holden in Freetown on 4th October, 2021.

The Commission wishes to reassure the general public of its resolve to fight corruption at all levels and pursue justice at all times without fear, favor or prejudice.

For further enquiries on this and other ACC matters, please contact MARGARET MURRAY, the Public Relations Officer on +232-78-83-21-31 or via email info@anticorruption.gov.sl. 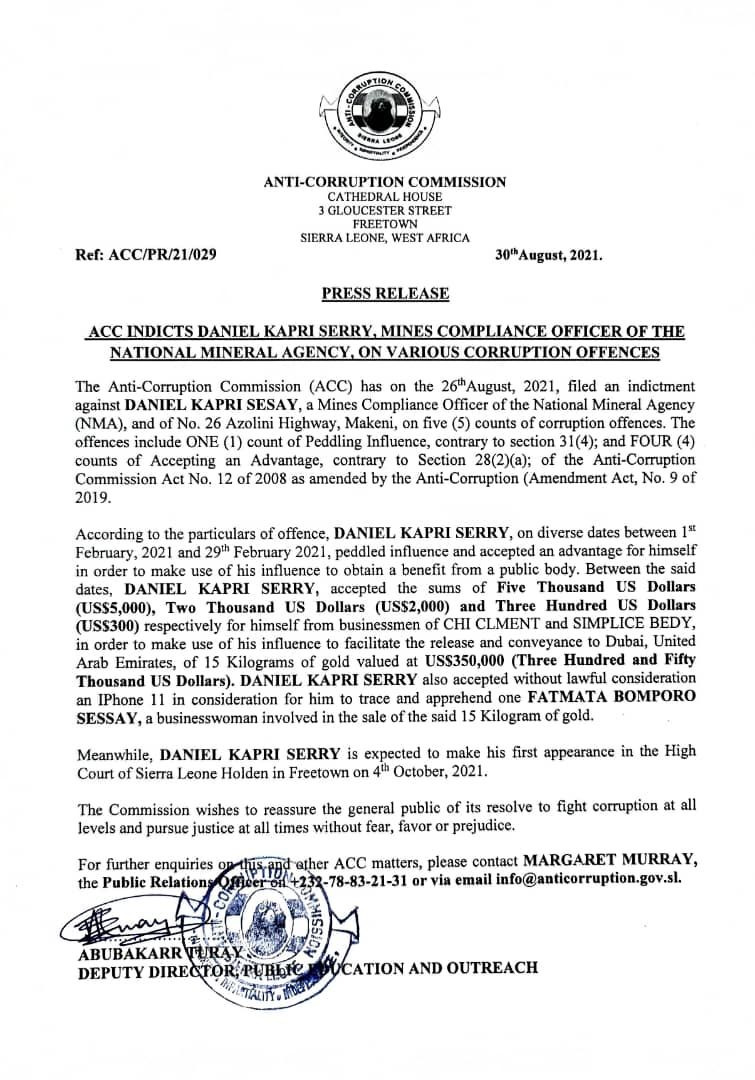 ACC INTERACTS WITH TRADERS IN BO