Acting on the Auditor General’s Report that public funds had been misappropriated by Dr. BENDU, Mr. LABOR at the SLRSA, and Ms. ALGHALI of the NRA, between January 2016 and December 2017, the ACC accordingly instituted an investigation. The investigations revealed that Dr. BENDU, Mr. LABOR, and Ms. ALGHALI, conspired to defraud the State of a total sum of TWO BILLION AND NINETY ONE MILLION, SEVEN HUNDRED AND THIRTY-SIX THOUSAND FIVE HUNDRED AND TWENTY LEONES, EIGHTY EIGHT CENTS (Le2, 091,736,520.88).

The accused persons, with intent to defraud the State, inflated customs duties, and payments for related services, and used the bank accounts of Centrum and KABS Clearing and Forwarding Agencies, and funneled monies in the guise of clearing tow trucks and holographic windshield labels.

Upon the transfer and receipt of each payment, the management of Centrum and KABS, on some occasions, directly transferred the funds to Ms. ALGHALI’s account. On other occasions, they withdrew these monies and handed over same to her in person. The investigations further revealed that Ms. ALGHALI shared these monies with various employees of the SLRSA, including Mr. LABOR and Dr. BENDU; who got the “Lion Share.”

Meanwhile, the three indicted persons are expected to appear in the High Court Holden at Freetown on the 2nd Day of October, 2019. In this light, the Commission wishes to reassure the general public of its unshaken resolve to fight acts of corruption at all levels in Sierra Leone.

For further enquiries on this and other ACC matters, please contact Ms. MARGARET MURRAY, the Public Relations Officer on +232-78-832131. 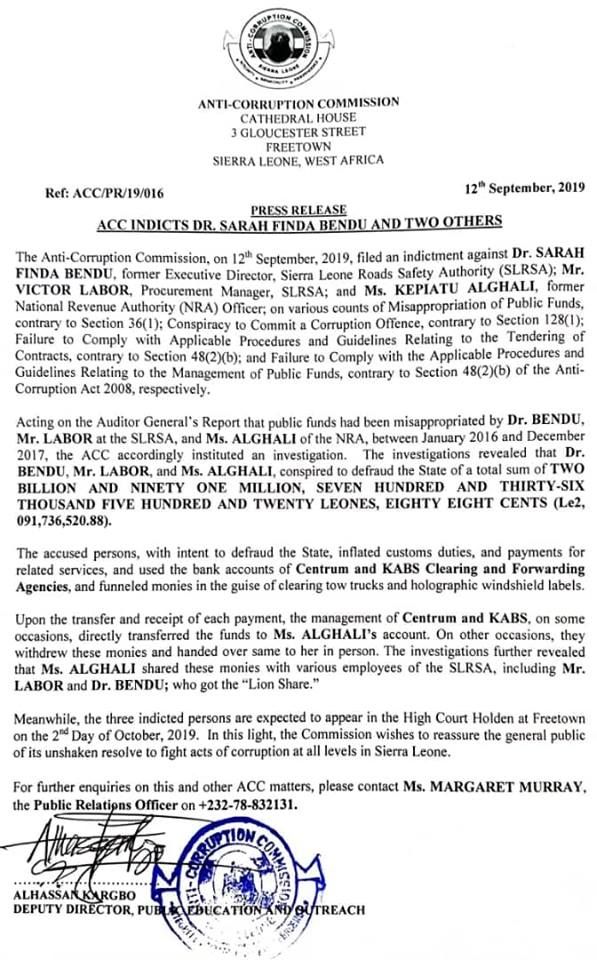