The Anti-Corruption Commission (ACC) wishes to inform the general public that the High Court of Sierra Leone, Holden in Freetown, presided over by the HON. JUSTICE ALUSINE SESAY JSC, on 2nd July, 2020, convicted AIAH MOMODU, Customs Broker, and of 26 Newcastle Street; and ABDUL S. KABBA, Delivery Clerk of Kollenten Shipping Services on the offence of Fraudulent failure to make payment of Custom levy, contrary to Section 48(1)(d) of the Anti-Corruption Act No. 12 of 2008.

The HON. JUSTICE ALUSINE SESAY JSC, convicted AIAH MOMODU and ABDUL S. KABBA and ruled that they pay a fine of THIRTY MILLION LEONES(Le: 30,000.000/00) each, within the period of thirty days, effective the date of the Judgment; or each serves a three- year imprisonment term.

On the other hand, AHMED KAMARA, an Officer of the Prevention Services and Special Duties Department of the National Revenue Authority, was acquitted and discharged, on the charge of Abuse of Office. Also, during the trial, the Judge had on the 28th October, 2019, ruled in favour of AHMED TAMBAWA, Documentation Supervisor at the Freetown Terminal Ltd (Bollore), on a No Case Submission.

The Commission wishes to further reassure the general public of its relentless commitment to controlling corruption at all levels in Sierra Leone.

For further enquiries, please contact MARGARET MURRAY, the Public Relations Officer on +232-78-83-21-31 or via emailinfo@anticorruption.gov.sl. 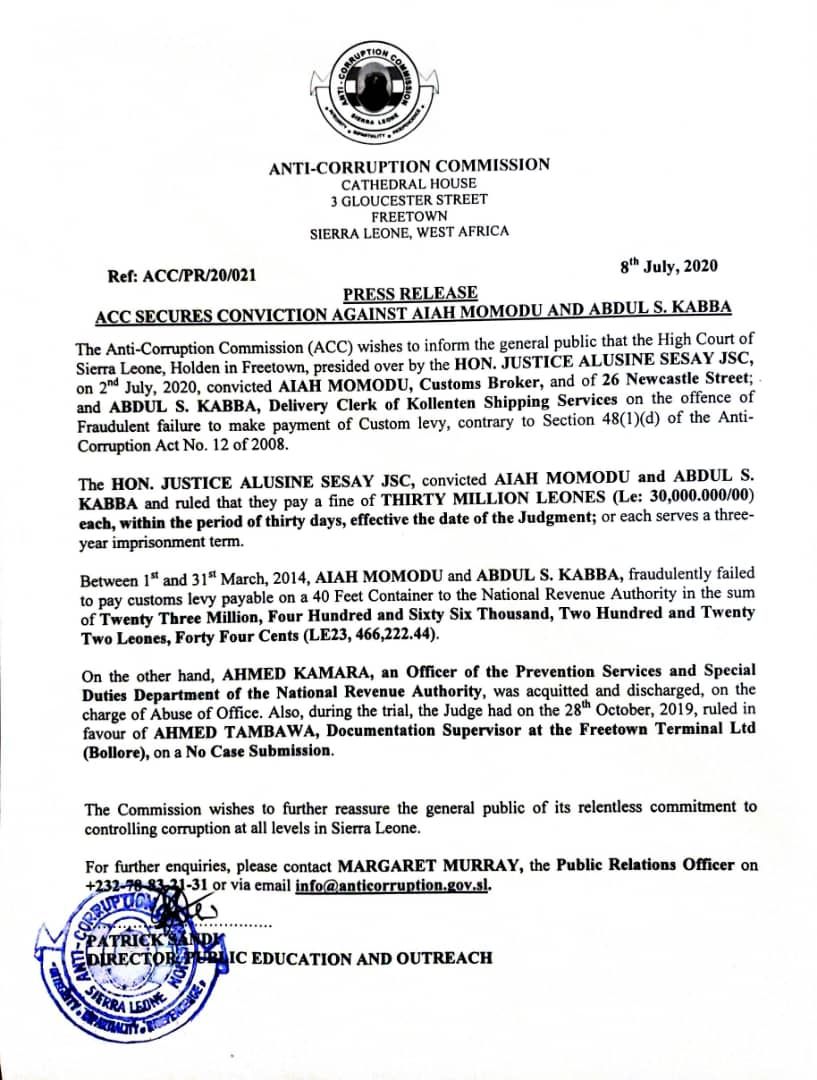