The Anti-Corruption Commission (ACC) wishes to inform the general public that the High Court of Sierra Leone, Holden in Makeni, presided over by the HON. JUSTICE UNISA KAMARA has on 22nd April, 2020, convicted MUSTAPHA KAMARA, former Information Officer of the District Medical Stores, in Makeni, Ministry of Health and Sanitation, on TWO (2) counts of corruption offences.

The HON. JUSTICE UNISA KAMARA, convicted MUSTAPHA KAMARA on all two (2) counts and ruled that he pays a fine of Thirty Million Leones (Le: 30,000,000) on each count or three years jail term, to run concurrently. The Judge further ordered that the fines be paid in two installments, with the 31st May 2020, as the deadline.

MUSTAPHA KAMARA, former Information Officer at the District Medical Store, and IDRISSA TURAY, former District Medical Store Keeper, were standing trial on two (2) counts of Misappropriation of Donor Property contrary to Section 37(1) and Conspiracy to Commit a Corruption Offence, contrary to Section 128(1) of the Anti-Corruption Act, No.12 of 2008.

IDRISSA TURAY, the co-accused had passed away during the course of the trial.

The Commission wishes to reassure the general public of its resolve to fight corruption at all levels and pursue justice at all times without fear or favor.

For further enquiries on this and other ACC matters, please contact MARGARET MURRAY, the Public Relations Officer on +232-78-83-21-31 or via email info@anticorruption.gov.sl. 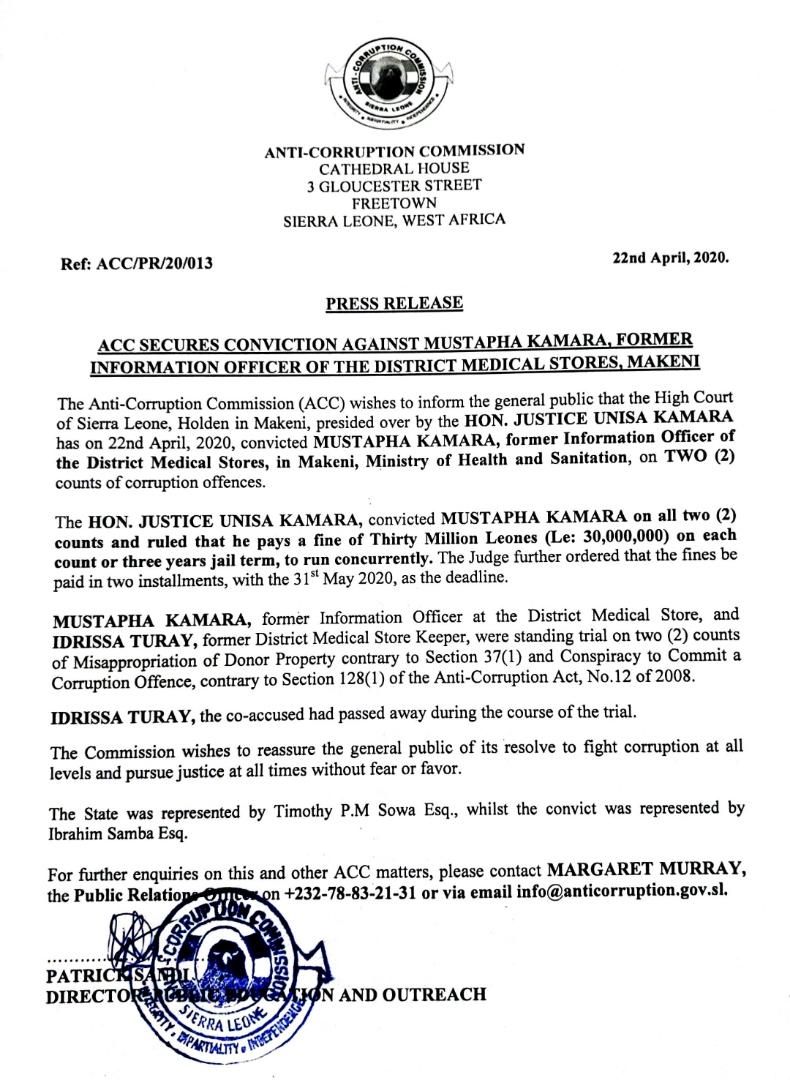