Start The Anti-Corruption Commission (ACC) in its zest to heighten and deepen public knowledge and understanding on anti-bribery issues nationwide on Thursday 24th and Friday 25th May 2018 sensitized the people of Port Loko and Lungi communities respectively; which is another endeavor by the Commission to widen its reach to more towns and cities. The meetings which were held at the Ministry of Agriculture Conference Hall in Port Loko City, and the Ministry of Primary and Secondary Education Hall in Lungi brought together over one hundred and fifty (150) participants drawn from all spheres of society.

Speaking at the meetings, Deputy Director Public Education and Outreach Department, ACC Patrick Sandi said the PNB is to curb bribery and small scale corruption in service delivery sectors, particularly in the Sierra Leone Police (SLP), health, education, energy, water and recently the judiciary. Mr. Sandi articulated that, PNB empowers the public to report incidents of bribery and petty corruption experienced in service delivery institutions-noting the three components of reporting; "I paid," "I resisted," and "I met an honest official". Mr. Sandi told his listeners that PNB is not prosecution-oriented; rather it requires heads of institutions through the Integrity Management Committees (IMCs) to take concrete actions/measures on reports received on the PNB platform which would eliminate the opportunities of small scale corruption in their entities.

The Deputy Director informed the public that the platform receives data on Port Loko District and is on the PNB website www.pnb.gov.sl and is accessible to all. He urged service providers to work earnestly and sincerely. He highlighted key positive actions taken by the MDAs such as the SLP, Health, Education and SALWACO. The SLP, he stated has dismantled 23 illegal checkpoints and demoted and dismissed senior police personnel as a result of bribery allegations through the PNB system. Further, he said, the Ministry of Education through the Deputy Directors has banned Saturday classes in Makeni, Kenema and Bo, emphasizing the practice of ban should be replicated in Port Loko district.

ACC Communications Officer Margaret Jones speaking on the purpose of the visit  said, PNB is the peoples campaign as it is intended to stop  bribery, which inhibits citizens from accessing critical services. Madam Jones also stated that service providers owe it to the public to deliver services in the required time and expected quality. The meeting she emphasized was aimed at informing all and sundry of the gains made in the implementation of the campaign since its inception in 2016. Communications Officer underscored the methods of reporting which are; the 515 free line, the mobile APP in Krio, Temne and Mende; and the website: www.pnb.gov.sl. and assured that the system was absolutely anonymous.

Project Officer, Campaign for Good Governance (CGG) Port Loko Mohamed Kamara, in his contribution thanked DFID and GoSL for this initiative and called on all to support the campaign. He outlined the role of CGG as civil society body in the PNB and stated that increased public awareness is needed always on issues relating to bribery and petty corruption since they hinge on the very survival of the poor.

Khalil S. Kabba, Principal  Bullom Ahmadiyya Muslim Senior Secondary School called on the ACC to closely work with Government and ensure the timely allocation/provision of resources for operations of MDAs, as it is critical to staff motivation and performance. He commended the PNB program noting, it has helped immensely in discouraging workers from asking for bribes before services are rendered.

Earlier, ACC District Coordinator Sahid M. Kamara, who chaired the meetings told his audience that PNB is an initiative of the Government of Sierra Leone (GoSL), led by the Anti-Corruption Commission and supported by DFID/UK aid and the GoSL. He implored citizens to make reports on incidences of bribery and petty corruption experienced on a daily basis, stressing the dangers of bribery which is, making poor people poorer.

The distribution of PNB information, education and communication materials and questions and answers session formed part of the meeting. 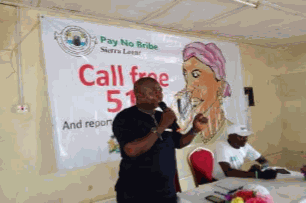 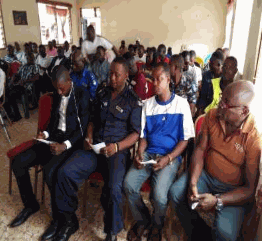 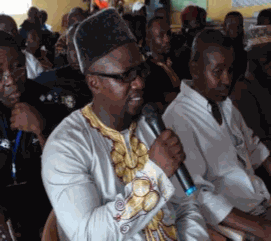 COULD IT BE NEGLIGENCE OR INCOMPETENCE? THE 2021 AUDITOR GENERAL’S REPORT STILL FLAGS THE SAME ISSUES.