The Anti-Corruption Commission (ACC) has on Tuesday 6th August 2019 signed an MOU with the Public Sector Reform Unit (PSRU) at the Commission’s 3 Gloucester Street Office in Central Freetown. The MOU outlines the collaborative engagement and partnership between PSRU and ACC which is geared towards fostering cooperation and collaboration between the two institutions in enhancing good governance through public sector reform.

Speaking at the signing Ceremony at the conference room of the ACC, The Director of PSRU, Mrs. Georgiana Kamara said the Unit has been in operation since January 2008, when it was first known as the Governance Reform Secretariat, but has since being changed to Public Sector Reform Unit in 2002, adding that its mandate remains the same.
Mrs. Kamara also said that the Unit provides leadership coordination and strategic guidance in the implementation of all Public sector reform initiatives in Sierra Leone, and as well takes the lead in respect of all coordination and integration of all reforms within a coherent, dynamic and holistic manner for the Public sector of Sierra Leone.
Speaking further on the significance of the MOU signed with the ACC, Mrs. Kamara maintained that PSRU is highly appreciative of the efforts of the Commission in clamping down on corruption and promoting accountability and transparency in public life, adding that it is against such backdrop that the PSRU has decided to forge a lasting relationship with the Commision so as to ensure accountability in all Public Sector reform initiatives.

On his part, the Deputy Commissioner of the ACC, Mr. Augustine Foday Ngobie expressed his appreciation for the efforts of public institutions in pegging a workable relationship with the Anti-Corruption Commission. He however noted that in the past, many MOUs after being signed, little is done to getting the best out of those partnerships, something he believes the ACC seeks to change.
“The PSRU and the ACC are major state institutions who have recognized the individual roles both parties are playing for the development of this country. This signing is also historic in the sense that we have to go beyond the mere signing of an MOU as it has been in the past... noting that, so many MOUs having being entered into, the implementation never materializes, but with the leadership of the ACC under The People's Commissioner- Mr. Francis Ben-Kaifala, we have moved away from such attitude and consider our work at the Commision as being part of the spirit of ‘talking and doing” Mr Ngobie added.

He further said that the Commission in carrying out its mandate under the New Direction of his Excellency Brig.Rtd.Julius Maada Bio, and in tandem with his campaign pronouncement in 2018 and even while in office, to do all what it can to blocking all leakages, the ACC will ensure that those pronouncements are transformed into reality in real time.
“Now that the PSRU have decided to enter into partnership with the ACC through the signing of this MOU, to joining in fight against corruption, we highly welcome you and assure you all of the Commission’s commitment to ensuring that together, we all can clamp down on corruption", Mr. Ngobie said.

In his concluding statements, Mr.Ngobie on behalf of the ACC Czar, the Directors and all staff of the Commission, assured all present that the signing will go a long way to addressing issues of corruption, maintaining that the Commission amidst all threats is not distracted but focused in complementing government’s efforts in the fight against corruption.

The ceremony was chaired by Mr.Patrick Sandi, Director of Public Education and External Outreach Department (PEOD) at the ACC while the citation marking the signing of the MOU was read by Margaret Murray, ACC’s National Public Relations’ Officer. 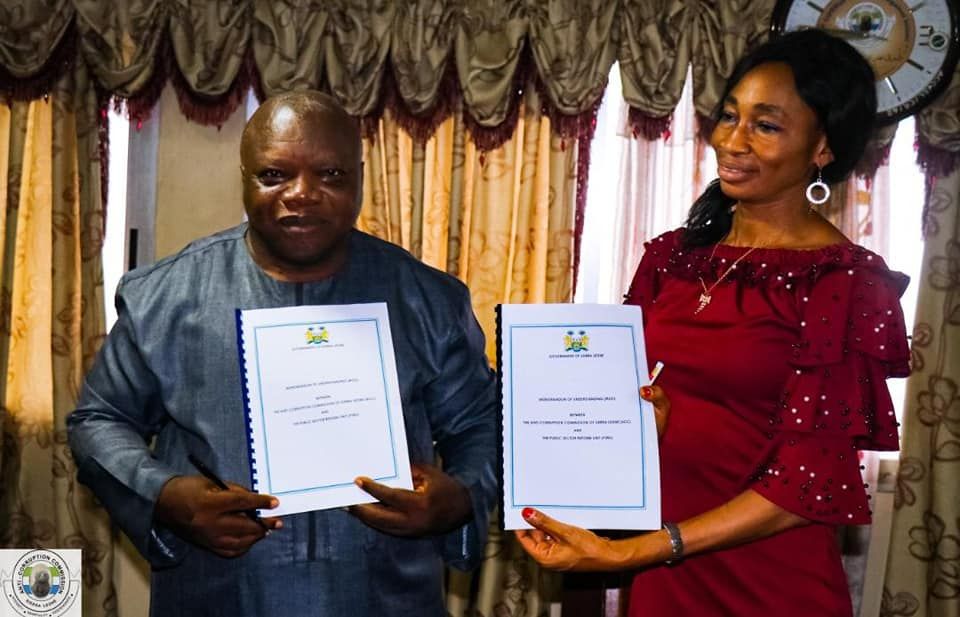