The Anti-Corruption Commission (ACC) has on Thursday 24th October 2019, signed a Memorandum of Understanding (MoU) with The National Commission for Democracy (NCD).

The signing ceremony, which took place at the NCD Conference Room, 9th Floor, Youyi Building in Freetown, is indicative of both institutions' sincere desire to continue complementing each other in the fight against corruption and democratization in line with their respective mandates to promote democratic good governance with a key focus on responsiveness and accountability by public officials.

Speaking at the signing ceremony, the Commissioner of the ACC, Francis Ben Kaifala Esq., said that the ceremony was "a historic one signaling a renewed commitment to unite against corruption that should go down in history", adding that "the whole idea of statehood centers around the concept of democracy, and NCD being the fulcrum for democratic good governance in Sierra Leone, will be a very significant partner in the collaboration to fight against corruption”. Commissioner Kaifala furthered that “Corruption destroys the fabric of democracy, it ensures that citizens cannot achieve the expectations upon which their constitutionalism and aspirations of statehood rest, and guarantees that whatsoever good plans the country has for the collective good can be easily hijacked by individuals and groups, thereby causing the state to fail; and if the state fails, then NCD and the ACC would fail to ensure that democracy flourishes so citizens can enjoy a life of dignity in a country of happiness”. The ACC Commissioner ended by thanking the NCD for their unrelenting commitment and support to the ACC.

The MoU, amongst other things, will foster understanding on the principles of collaborative engagement and partnership between the two institutions. According to the agreement, ACC and NCD will complement each other’s efforts in the fight against corruption, especially in areas where their respective mandates are interrelated; collaborate in sensitizing and educating the public on issues anchoring on the nexus between the fight against corruption and the promotion of democratic good governance; and synergize to promote and instill patriotism in citizens.

On his part, the erudite Dr. Abu Bakarr H. Kargbo, Chairman of the National Commission for Democracy, commended the ACC for the remarkable efforts being made so far in the fight against corruption. He remarked that the signing is another epoch-making moment for both institutions “at a time when the fight against corruption has reached a very critical juncture. There is therefore the need to take decisive action to save the very soul of Sierra Leone”.

Dr. Kargbo said, the performance of the current ACC Commissioner and his team, is worth commending with rising hope in the fight against corruption, adding that the commission’s passion to curbing corruption is evident for all to see and that such passion should be contagious and emulated by all in the context of democratic good governance.

“Today’s signing is indicative of our sincere desire to continue with the fight against corruption in line with the mandate of NCD in the promotion of democratic good governance with a focus on transparency and accountability, and NCD is as well throwing its weight behind ACC in this fight in the country, a fight that has far-reaching implications for Sierra Leone’s political economy with the imperative to fixing it and making it work in the best interest of every citizen of our beloved motherland”, he said. Dr. Kargbo concluded by pledging their unrelenting support to the work of the ACC; ensuring their commitment as a national institution to stand by the ACC in giving and consolidating a clear direction in the fight against corruption.

Delivering his welcome address and statement of purpose, Commissioner of NCD-Northern Region, Mr.John Bai Conteh lauded the partnership and further described the two commissions as "twin crops put together to promote solid good governance practices that will harness the dividends of democracy in Sierra Leone"

The signing ceremony was chaired by Rev. Gibril Kargbo, Director of Communications and Public Relations at NCD, who stated that the MoU is signed with a renewed zest and commitment in the spirit of the New Direction and aspirations of the ACC. The vote of thanks was given by Miss Margaret Murray, the Public Relations Officer of the Anti Corruption Commission, following an interactive session with the press whereby the team from NCD and ACC responded to questions asked by members of the press present. 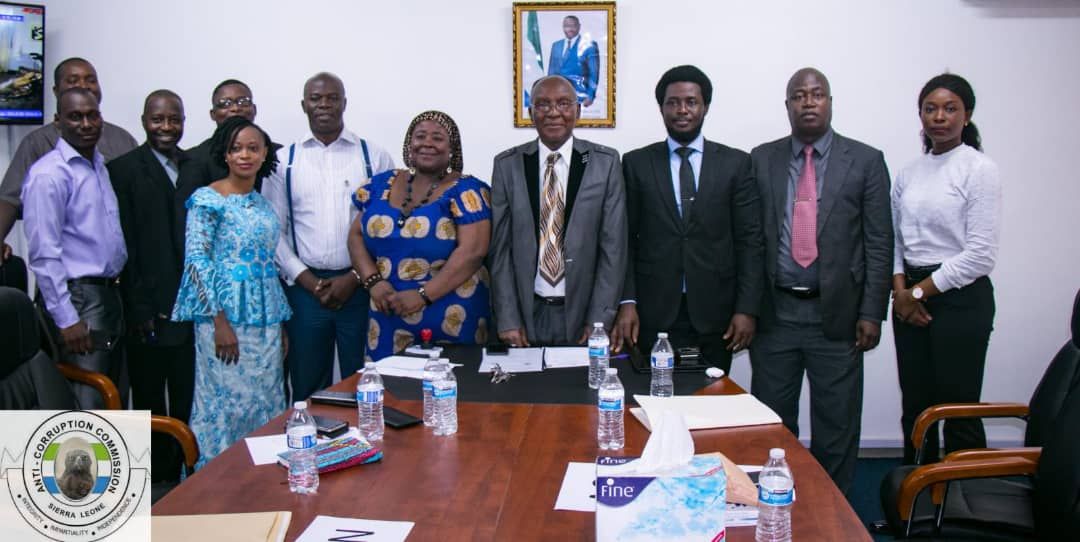 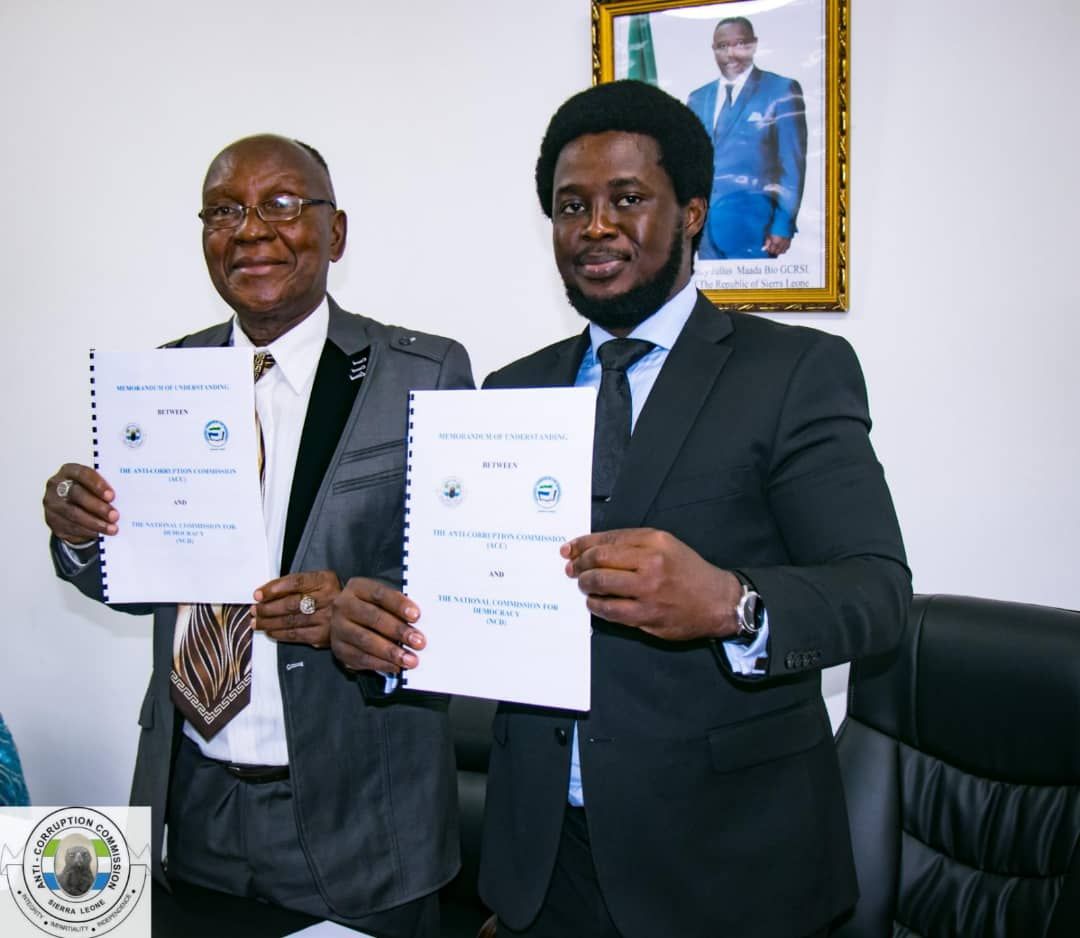 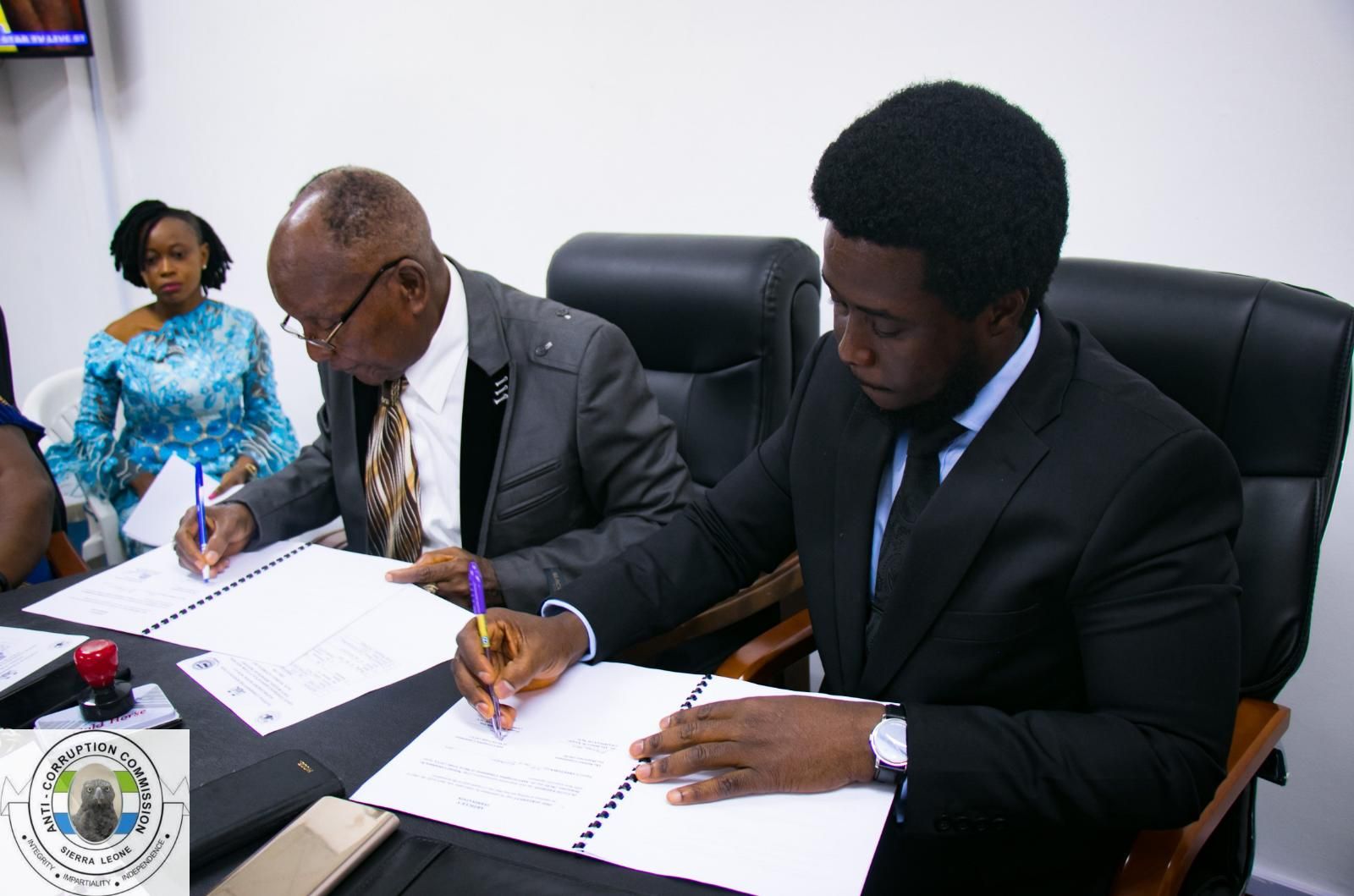