AS THE SOUTH GETS A REGIONAL PROCUREMENT OFFICE, THE NPPA SIGNS MOU WITH THE ACC

The Anti-Corruption Commission (ACC) has on Wednesday 26th June 2019 signed a Memorandum of Understanding (MoU) with the National Public Procurement Authority (NPPA) at its newly opened branch office in Bo.

Speaking at the ceremony, ACC Boss, Francis Ben Kaifala commended the NPPA for such a laudable venture;…"a branch that is supposed to open up the transparency space in Sierra Leone and help us in our effort to see that this country is transformed from what it used to be to a better one.", he said.Signing the MoU, Commissioner Francis Ben Kaifala, together with Ibrahim Swarray, the Chief Executive Officer (CEO) of NPPA commended the effort, referring to it as one that will mark the beginning of a stable and committed relationship between the two institutions. This move, according to the ACC Boss, will synergize the efforts and roles of both institutions in the anti-graft campaign.

Commissioner Kaifala, who was the keynote speaker at the event, stated that greed and wickedness rooted in human nature are the main sources of Sierra Leone’s problems. He furthered that what we can do is to suppress that nature so that it does not threaten the communal goal of a society where resources are distributed fairly for the benefit of the collective over the individual interest. He highlighted that institutions such as the ACC, NPPA, Audit Service, etc. were created to work towards achieving that one goal-ensuring accountability for us to be able to tame our fellow men in their natural tendencies and to prevent corruption from hindering development. He concluded that the signing of the MoU with the NPPA was to help the two institutions complement each other's efforts in the fight against corruption. He noted that procurement is the linchpin which needs to be arrested and cuffed if the fight against corruption is to be easily won; corruption being the foundation upon which conflict of interest, misappropriation and other corrupt crimes are built.

On his part, the Leader of Government Business in the Sierra Leone House of Parliament, who also doubles as the Speaker designate for the ECOWAS PARLIAMENT, Hon.Sidi Mohamed Tunis commended Mr.Ibrahim Swarray for taking the bold step in the right direction, adding that this will help curb the excesses and leakages in the procurement sector. He also highlighted the fact that this stride goes to showing that the Government of Sierra Leone is very serious about transparency in the handling of public funds.

Mr. Swarray, who was beaming with delight at the opening of the Southern Regional Office and the signing of the MoU, underscored that his office is committed to ensuring that the due process is followed where public procurement is concerned and would ensure full compliance with the Public Procurement Act of 2016. He committed himself to working with the ACC to investigate and, where necessary, prosecute anyone found wanting.

Commissioner Francis Ben Kaifala concluded by assuring him of his commitment to making sure that complaints are swiftly dealt with.

He reminded those present that "the line has been drawn" on corruption and that, that line is being guarded vigilantly while warning that no one should let himself be caught on the other side of it.

In attendance were Resident Ministers for the South and Eastern Regions.

Representatives of the Mayors of Bo and Kenema, Board Chairman of the NPPA were also in attendance.

This signing comes at a time when 70% of public funds are allocated to procurement. 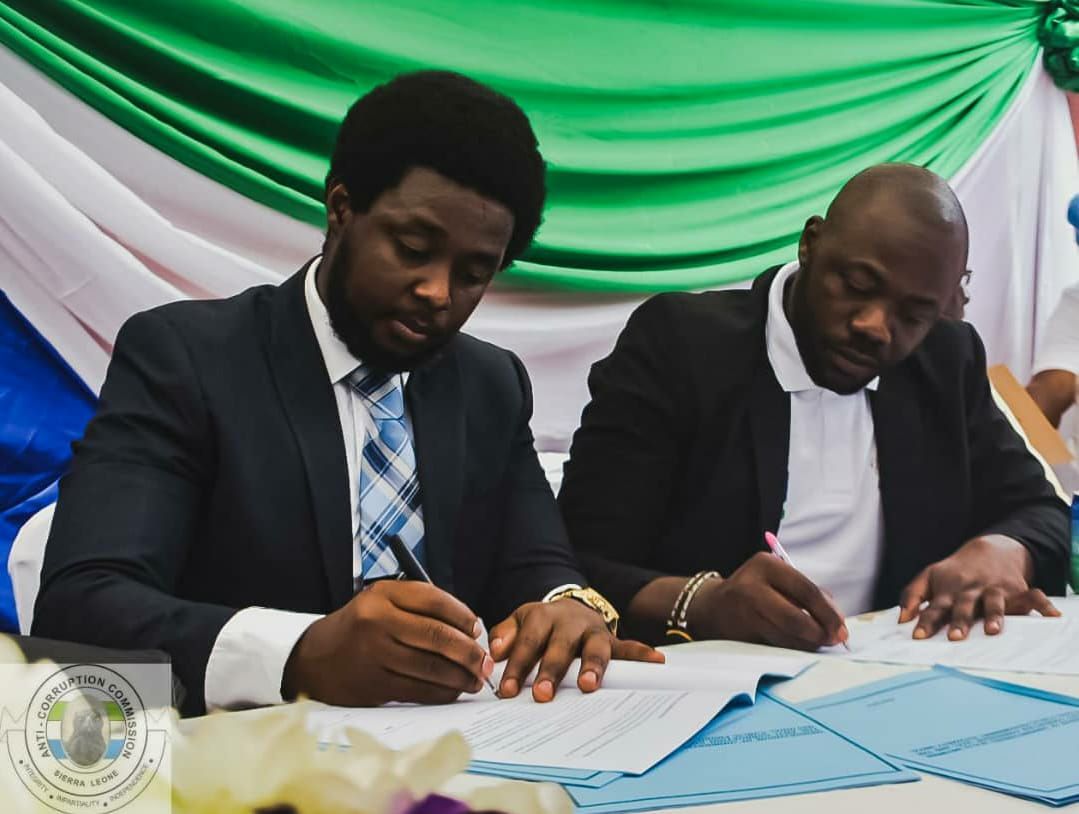