The Anti-Corruption Commission (ACC) wishes to inform the general public that it has received the sum of ONE BILLION LEONES (LE 1,000,000,000.00) from the Sierra Leone Cement Corporation (LEOCEM) as settlement for issues relating to unmetered electricity abstraction from the National Grid of the Electricity Distribution and Supply Authority (EDSA).

This payment follows an undertaking made by the Managing Director of LEOCEM Francesco Lanza, on 10th December, 2020, to pay the said sum following negotiations and settlement by and between Ministry of Energy, the EDSA and the ACC.

It could be recalled that, as a result of the MOU signed between the ACC and the Ministry of Energy to support the Ministry to control corruption in the electricity generation and supply sector, on 20th March, 2020, a Team comprising the ACC’s Scorpion Squad, the Ministry of Energy, raided and discovered unmetered electricity abstraction lines at the LEOCEM Cement Factory in Cline Town in the East of Freetown. This led to the invitation to the ACC of some LEOCEM staff, including its Managing Director Francesco Lanza to assist with the investigation. As a result, the Managing Director of LEOCEM made an undertaking to pay ONE BILLION LEONES (LE 1,000,000,000.00); which sum has been paid to the ACC for onward payment into the Consolidated Revenue Fund of the Government of Sierra Leone.

The Commission wishes to further reassure the general public of its continued commitment in ensuring that public funds and resources are protected; and where necessary, recovered.

For further enquiries on this and other ACC matters, please contact MORIS IBRAHIM KANTEH, the Assistant Public Relations Officer on +232-78-832131. 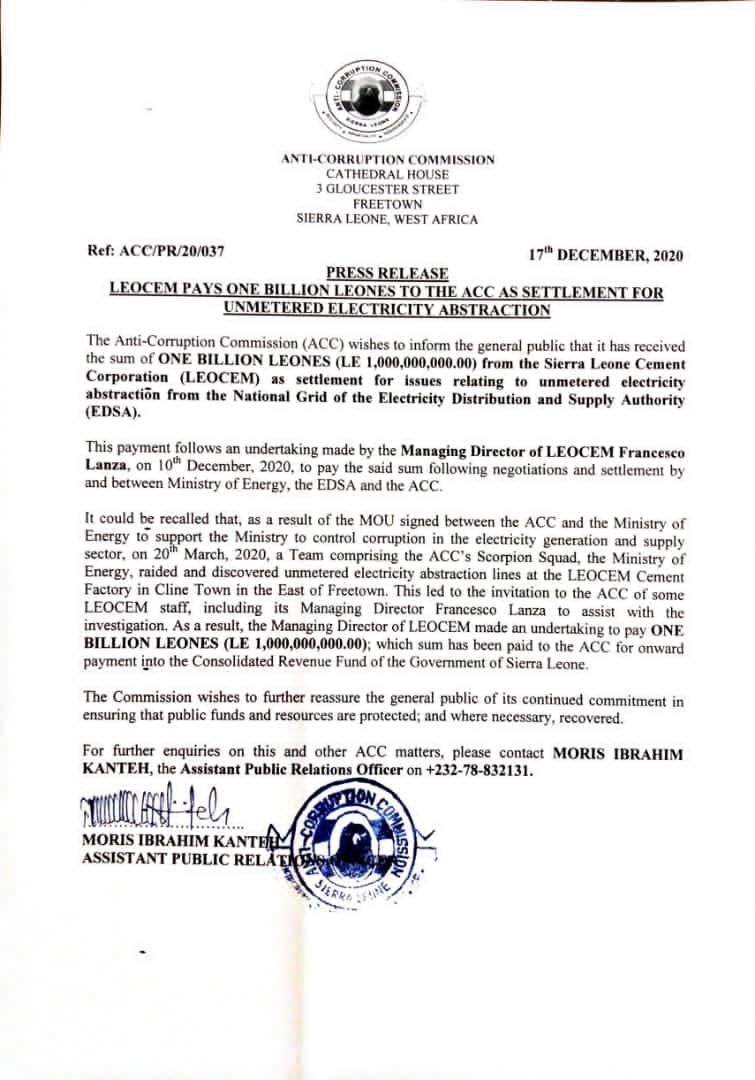