The Anti-Corruption Commission (ACC) is pleased to announce that the House of Parliament of the Republic of Sierra Leone has on Thursday 31st October, 2019 passed the Anti-Corruption (Amendment) Act 2019, being an amendment to the Anti-corruption Act 2008.

The Amendment Act provides for, among other things, increased penalties for offences under the Act; strengthens protection for witnesses and whistleblowers; provides the ACC with alternatives to prosecution; widens the scope of corruption to include that the accused ‘offered’, ‘solicited’, ‘obtained’ or ‘received’ in addition to ‘gave and accepted’ an advantage; reduces the year-long requirement that persons who cease to be public officers have to file a declaration in respect of their assets; provides for administrative sanctions for public officers who fail to submit their asset declaration forms or knowingly record false, inaccurate or misleading information in the forms; introduces trial of those accused of corruption in absentia; limits the scope of public officer to declare their assets and imposes sanctions for non-compliance; and vests in the ACC Commissioner power to direct that contracts with elements of corruption in their processing may not be proceeded with after agreement with the National Public Procurement Authority.

Following the passage of the Bill, the Commissioner of the ACC, Francis Ben Kaifala Esq. had this to say: “The People’s Anti-Corruption (Amendment) Bill, 2019 fully empowers the ACC to make corruption very expensive and more efficiently confront corruption at all levels; including preventing the signing of contracts that are NOT in the national interest."

The Bill, which was first tabled in Parliament some seven months ago, was passed after going through the legislative stages and committees in Parliament, including a vote by Members of Parliament specifically on the "contracts clause"; and thereafter the entire bill, following a vibrant bi-partisan debate.

The Bill now awaits assent by the President of the Republic of Sierra Leone, His Excellency, Brig. (Rtd.) Julius Maada Bio to become Law. 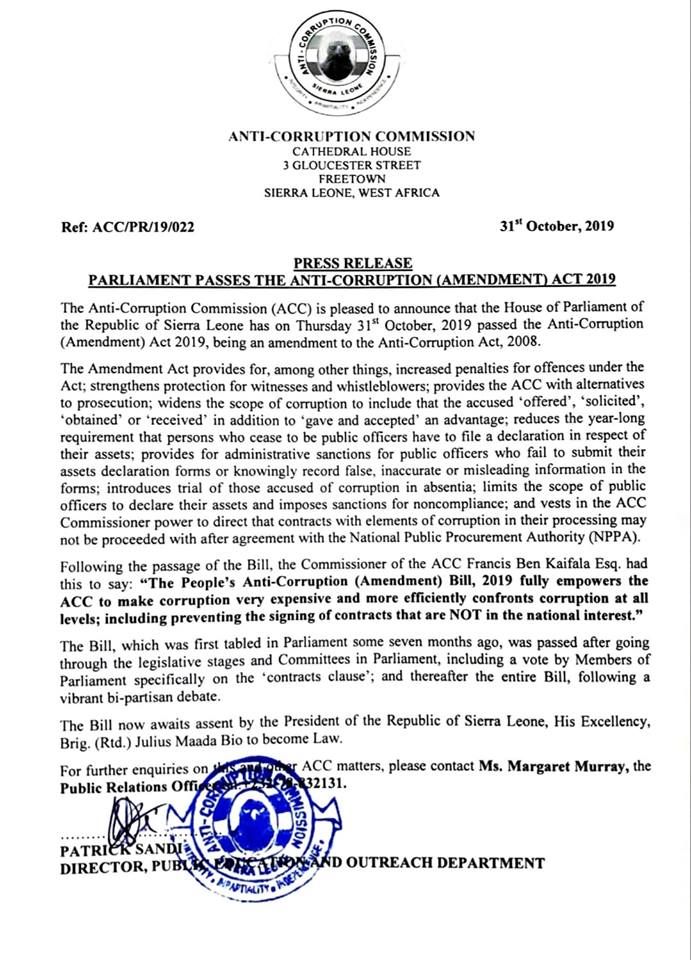