Sierra Leone has been ranked 3rd out of 35 African countries surveyed, on Government’s effectiveness in the fight against corruption, ahead of all other West African countries and behind only two countries in Africa. According to the Transparency International (TI) Global Corruption Barometer for Africa-2019 Report, 66 percent of Sierra Leoneans in 2019 believe the Government is doing well in the fight against corruption; against 19 percent of citizens who held this view in 2015. In the whole of Africa, 59 percent of citizens rate their Government’s performance as bad.

The Report which was launched in Sierra Leone on 11th July 2019 by the Institute for Governance Reform (IGR) gauges citizens’ perceptions on the effectiveness of their Governments in tackling corruption.

The Report further states that Sierra Leoneans who believed corruption had increased in the country in the last twelve months of the survey declined by 27 percent-from 70 percent in 2015 to 43 percent in 2019.

The Report also shows that the percentage of citizens who believe that there is corruption within Government circles declined by 50 percent-from 48 percent in 2015 to 24 percent in 2019.

According to the report, there is also a decline in citizens’ perception on the rate of bribery within the Police from 64 percent in 2015 to 39 percent in 2019.

This comes in the aftermath of Sierra Leone’s remarkable pass in the Millennium Challenge Corporation’s Control of Corruption Indicator, with 71 percent, moving 22 percentage points upwards from the previous score of 49 percent.

In this regard, the Commission continues to assure the general public of its relentless resolve to fight all levels of corruption and to effectively control it in Sierra Leone.

For further enquiries on this and other ACC issues, please contact Margaret Murray, the Public Relations Officer on +232-78-832131. 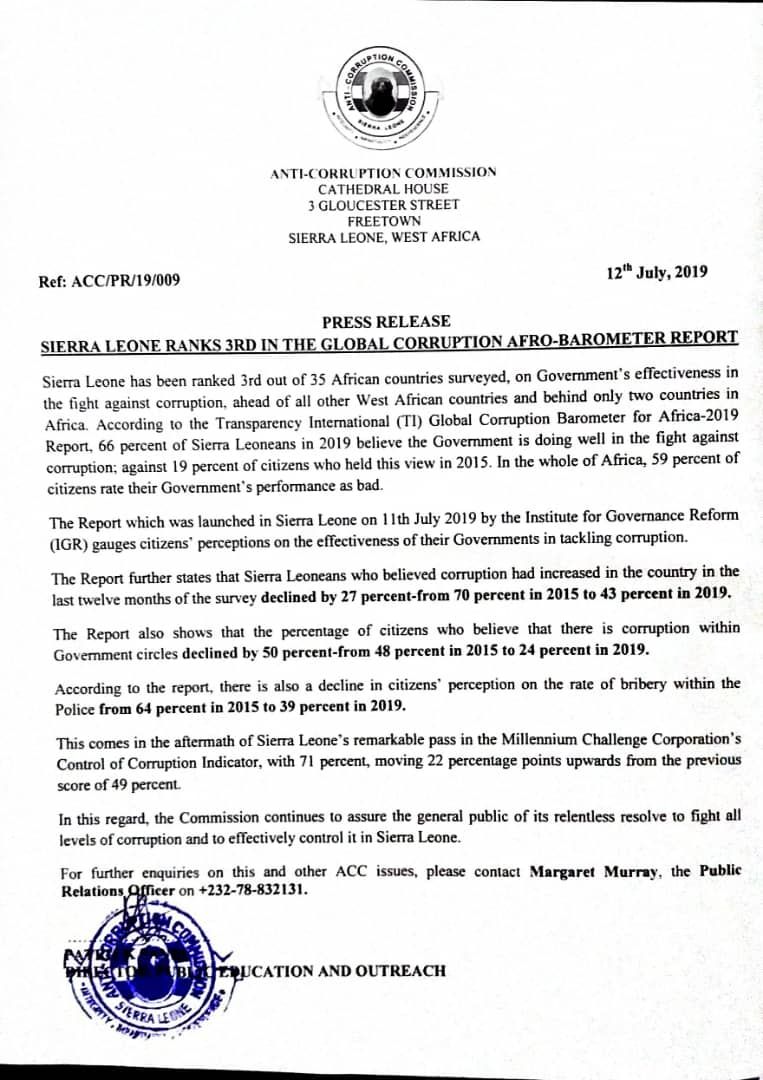