The Anti-Corruption Commission (ACC) is pleased to inform the general public that, the United States Department of State has, in its inaugural ‘INTERNATIONAL ANTI-CORRUPTION CHAMPION AWARDS’ on Tuesday 23rd February, 2021, announced and recognised Commissioner Francis Ben Kaifala Esq., as “International Anti-Corruption Champion 2020” for his “outstanding commitment to the prevention, exposure, and combating of corruption as Commissioner of Sierra Leone’s Anti-Corruption Commission”. This honour was bestowed upon the former worthy Fulbright Scholar at a ceremony organized for that purpose by the Charge D’Affaires and the team at the US Embassy in Freetown.

In assessing this distinct honour, the United States Department of State Bureau of International Narcotics and Law Enforcement Affairs took into consideration the remarkable work and achievements of the ACC since Mr. Kaifala’s appointment by His Excellency, President Brig. (Rtd.) Dr. Julius Maada Bio in June 2018, to lead the fight against corruption in comparison to all other anti-graft campaigners in the World.

The Department specifically highlighted the Commission’s achievements in fairly fighting corruption by holding the past government officials accountable while also taking robust action to address corruption in the current government that appointed him and equally holding them accountable. It highlighted the impressive array of cases investigated and prosecuted, the very high convictions secured, interventions to address systems weaknesses in Ministries, Departments and Agencies of Government, which resulted in the protection of public revenues and improved service delivery and the huge unprecedented public funds recovered in less than two years – more specifically in 2020.

It also notes the massive progress the country continues to make in respected International indexes, like Transparency International, Afrobarometer, Millennium Challenge Corporation; and also, the reduction in the cases of bribery and corruption in the country, as recorded by credible local Non-governmental organizations, like the Public Financial Management Consortium and Institute for Governance Reform.

Reacting to the news of the Award, the ACC Commissioner thanked the US Government, particularly the US Embassy in Sierra Leone for the recognition, adding that “When a credible institution like the US Department of State recognises you for the work you do as Head of an Anti-graft Agency, you can only payback by continuing to put more robust efforts into the campaign in an impartial, fair and fearless manner”. He also expressed thanks and appreciation to the Government and people of Sierra Leone, especially President Bio, for the confidence reposed on him to lead the country’s anti-corruption efforts adding that the honour was for his staff and the people of Sierra Leone.

The public may recall that, this outstanding recognition comes in less than one month when Commissioner Kaifala was elected member of the Africa Union Advisory Board on Corruption, with overwhelming majority due to his strong leadership and achievements in the fight against corruption in Sierra Leone, which is positively impacting the African continent.

For further enquiries on this and other ACC matters, please contact MARGARET MURRAY, Public Relations Officer on +232-78-832131 or via email info@anticorruption.gov.sl. 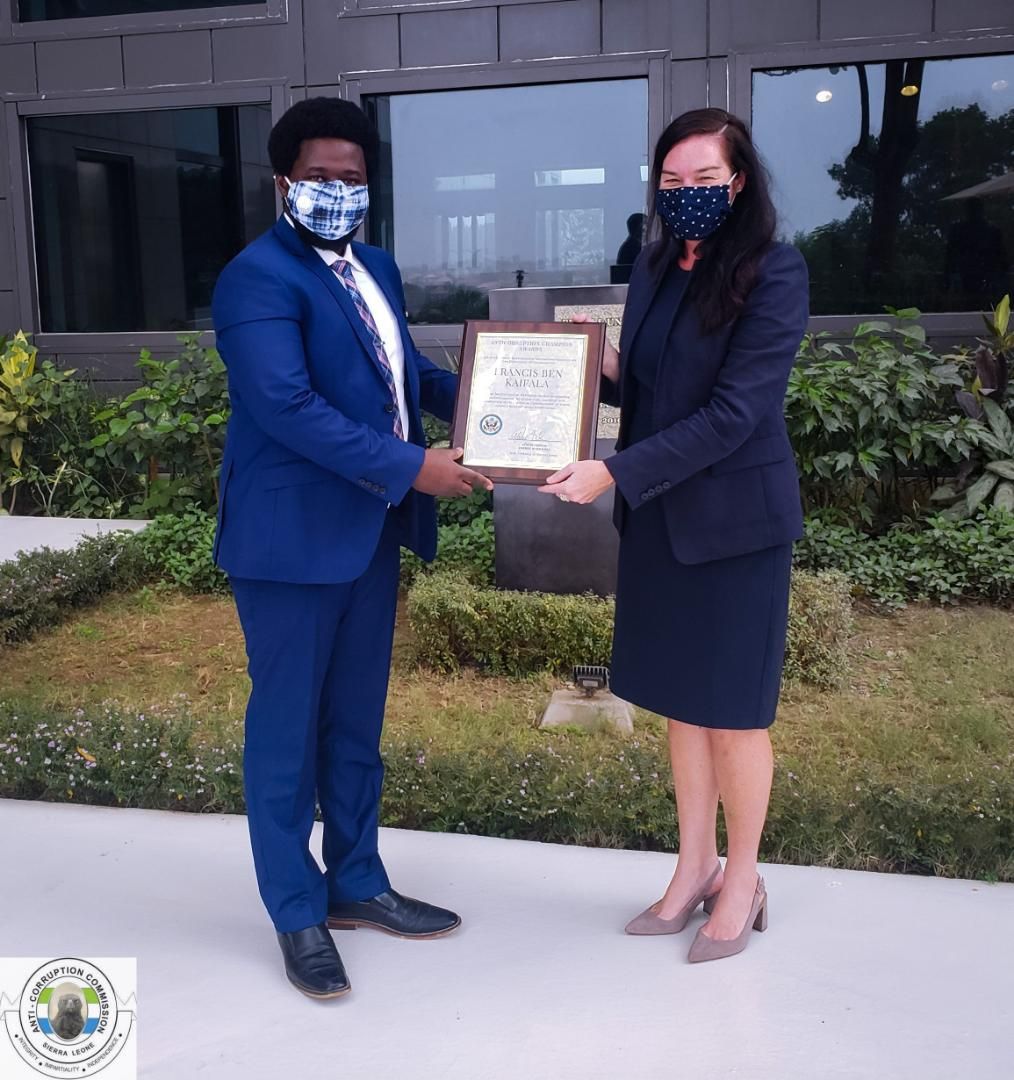 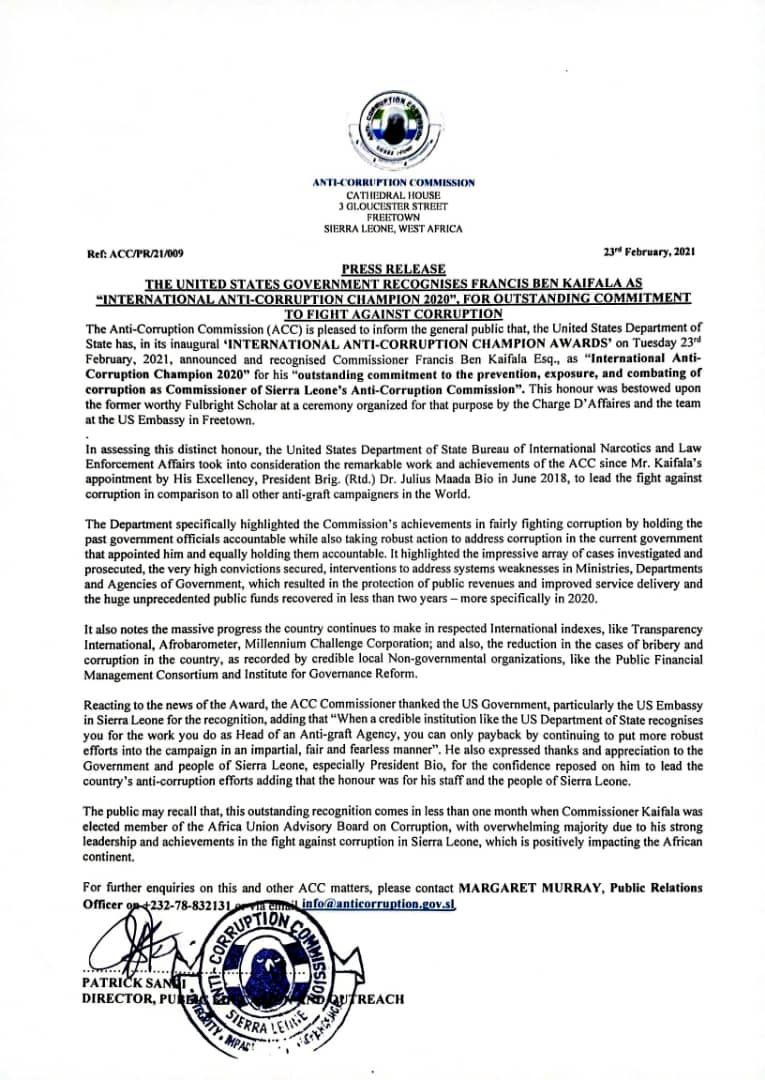 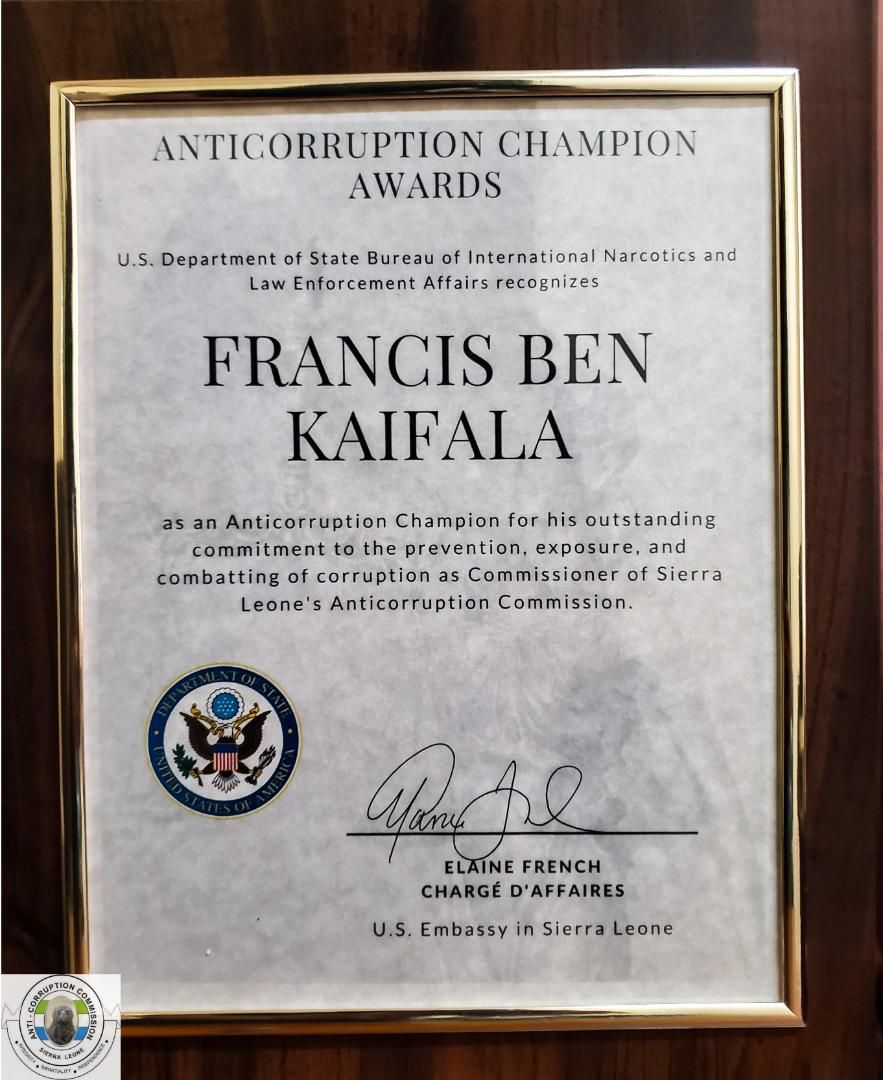 WHAT IT TRULY MEANS TO POLITICIZE THE FIGHT AGAINST CORRUPTION