UPDATE ON ACC’s ACTIONS AND INTERVENTIONS ON AUDITOR GENERAL’S REPORTS 2019 AND 2020 (No.2)

The Anti-Corruption Commission (ACC) in this second media release, wishes to update the general public of the actions and steps it has taken to address critical issues raised in the Audit Reports of Sierra Leone 2019 and 2020. These interventions focused on aspects of possible, or alleged corruption, and conducts inconsistent with the provision(s) in the Anti-Corruption Act of 2008 as amended in 2019.

After a thorough review, and analysis of the aforementioned Reports, the Commission initiated actions; with a view to investigating, prosecuting, or recovering public funds, public revenue, public property, as the case maybe, in accordance with Sections 7, and 48 of the Anti-Corruption Act of 2008 as amended in 2019, respectively.

Below are the second set of issues, and areas of ACC interventions, and the outcomes of same:

1.      MAKENI GOVERNMENT HOSPITAL. The 2019 Audit Report highlighted Five queries against the Makeni Government Hospital. They include; Ninety Million Leones (Le90,000,000) paid for fuel that was not supplied; payment of One Hundred and Twelve Million, Six Hundred and Thirty Thousand, Four Hundred Leones (Le112,630,400) contract not fully executed; imprest of Thirty-nine Million, Four Hundred and Sixteen Million Leones (Le 39,416,000) not retired in 2019; payment of Three Hundred and Ninety-eight Million, Forty-seven Thousand, One Hundred and Fifteen Leones (Le398,047,115) without supporting documents; and withholding tax of Seven Million, Nine Hundred and Eighty-eight Thousand, Nine Hundred and Six-one Leones (Le7,988,961) deducted but not paid to the National Revenue Authority (NRA). After thorough investigation into the said issues, the Commission was able to establish that no act of corruption was committed, as all supporting documents in relation to the queries were presented to ACC Investigators.

3.      ELECTRICITY DISTRIBUTION AND SUPPLY AUTHORITY (EDSA). The 2020 Audit Report stated that EDSA was given a loan valued at Seven Million United States Dollars (USD $7,000,000), which was a clear liability of EDSA related to a revolving Letter of Credit to enable a steady supply of fuel for the Karpowership. But relevant documents for this loan were neither submitted to the Auditors nor disclosed in the General-Purpose Financial Statement. Investigations by the ACC however show that, EDSA was not given a loan as mentioned in the Report. The Investigations show that the Letter of Credit remains a contingent liability yet to be utilized. The ACC also finds that EDSA has so far been fulfilling its financial obligation under the contract. Therefore, this issue will be Kept in View (KIV).

4.      SIERRA LEONE ROADS AUTHORITY (SLRA). The 2020 Audit Report alleged that SLRA paid untaxed allowances to the tune of One Hundred and Sixty Million, Nine Hundred and Sixty-five Thousand Leones (Le160,965,000) to Board Members between 2016 and 2018. ACC investigations however showed that there was no direct/indirect fraud of embezzlement of public funds; rather it was negligence on the part of the authorities concerned. Therefore, ACC has recommended for the Management of SLRA to refund the full amount.

a)      The amount of Eight Hundred and Seventy-two Thousand, Three Hundred and Forty-nine United States Dollars and Sixty-seven Cents (USD $$872,349.67) which was allegedly used to purchase Maritime items/equipment is owed to the Government of Sierra Leone (GoSL) by the Ship Registration Limited/SLMARAD.

b)      The then Executive Director single handedly took the decision to utilize the 3rd party money owed to GoSL without the approval of the line Ministry, Board of Directors of SLMA and Ministry of Finance. The ACC has therefore asked him to refund the said USD $872,349.67.

c)      With regards the Fifteen Thousand, Six Hundred and Eighty-five United States Dollars and Fifty-Nine Cents (USD $15,685.59) highlighted in the Audit Report as outstanding payment to be made by SLMARAD, the ACC has asked that the payment is effected and evidence of payment be requested.

d)     The agreement between SLMARAD and GoSL and SLMA is revisited and to go through the Ministry of Justice, Cabinet and/or Parliament for ratification.

e)      The parties to the contract representing GoSL should be hiring external Auditors to audit the activities of SLMARAD every six months to ascertain detailed sales, government shares, number and details of registered vessels, certified seafarers, technical statistics, legal and operational overview.

We continue to thank and appreciate Audit Service Sierra Leone (ASSL) for their diligence and cooperation in helping to combat corruption in Sierra Leone and Parliament for their support.

For further enquiries on this, please contact David Yusuf Kabia, Public Relations Assistant, on +232-78-832131 or via email info@anticorruption.gov.sl. 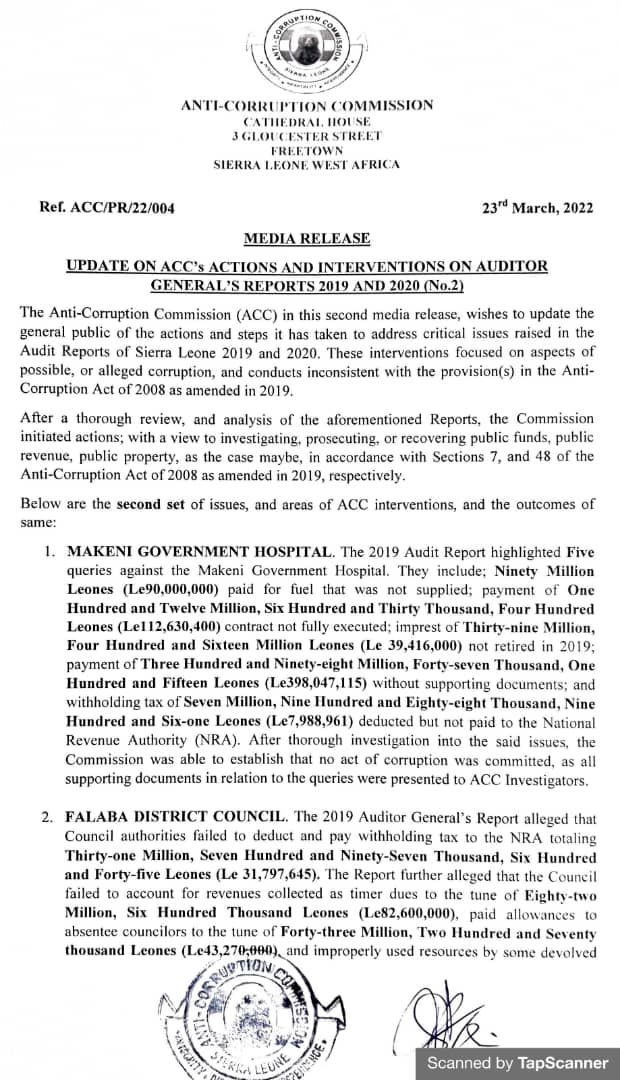 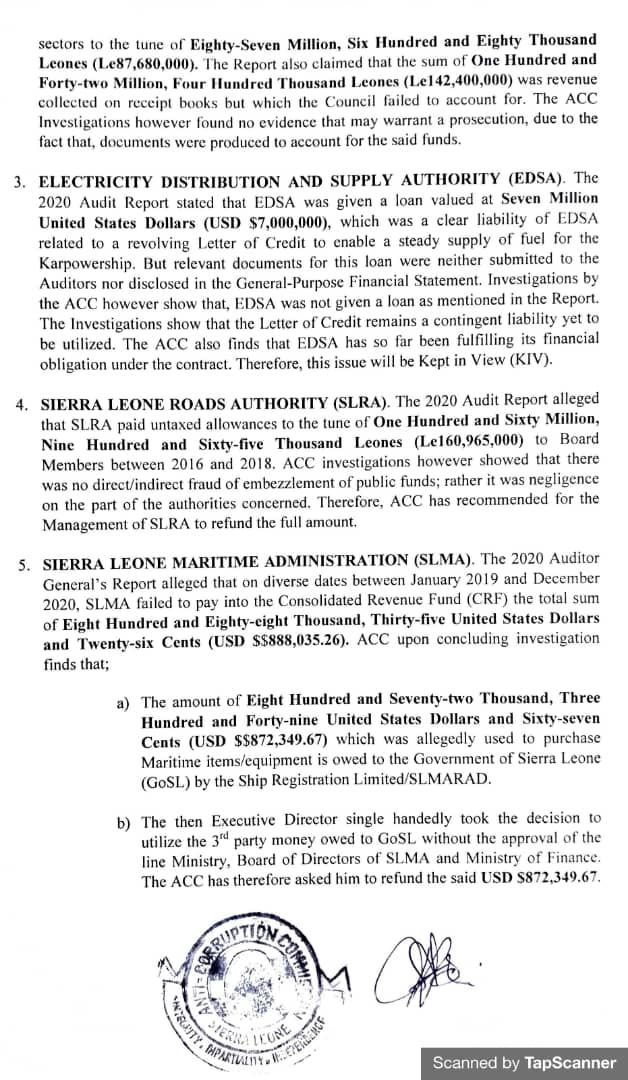 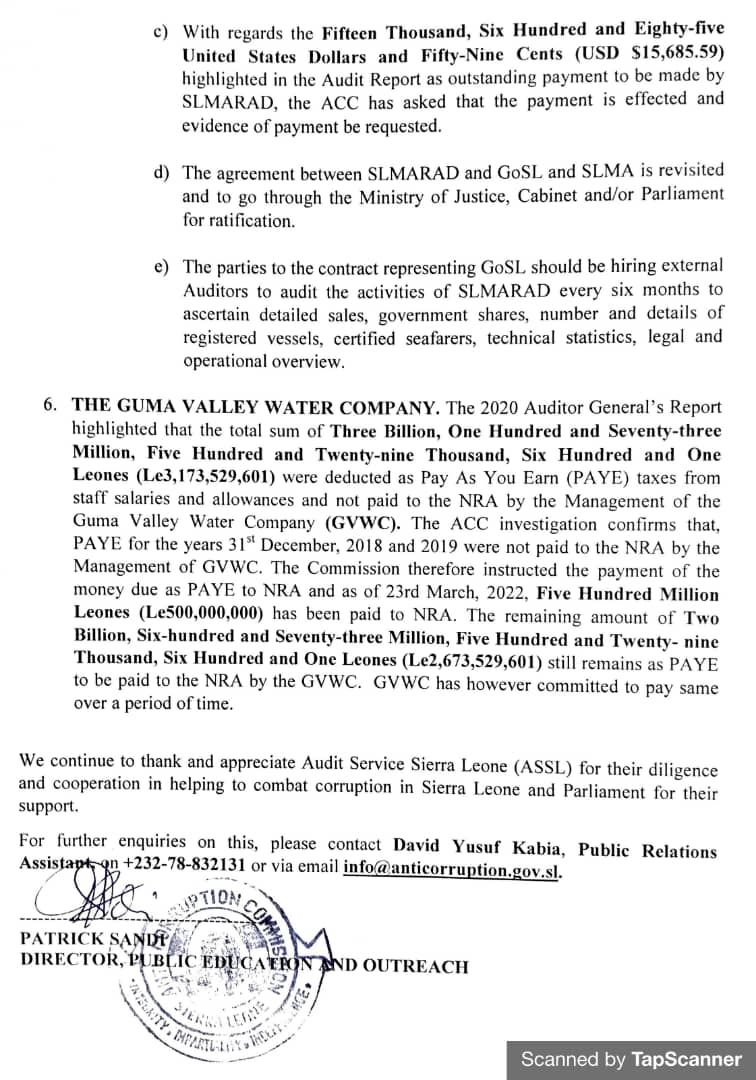