The Anti-Corruption Commission (ACC) in this third media release, wishes to update the general public of the actions and steps it has taken to address critical issues raised in the Audit Reports of Sierra Leone 2015 - 2018. These interventions focused on aspects of possible, or alleged corruption, and conducts inconsistent with the provision(s) in the Anti-Corruption Act of 2008.

After a thorough review, and analysis of the aforementioned Reports, a total of twenty-one (21) issues attracted the attention of the Commission; with a view to investigating, prosecuting, or recovering public funds, public revenue, public property, as the case maybe, in accordance with Sections 7, and 48 of the Anti-Corruption Act of 2008 respectively.

Below are the third set of issues, and areas of ACC interventions, and the outcomes of same:

The ACC has charged two (2) matters to Court.  Furthermore, there are thirteen (13) ongoing active investigations. Two (2) matters have been accordingly closed for lack of evidence. In terms of monies returned to the State, the Commission has recovered a total sum of Two Billion, Seven Hundred And Forty-Two Million, One Hundred And Eighty-Five Thousand, Three Hundred and Four Leones, Sixty-One Cents (Le 2, 742, 185, 304, 61).

1. SIERRA LEONE ROAD SAFETY AUTHORITY (SLRSA) -- The Audit Report alleged that the Former Executive Director of the SLRSA, Dr. Sarah F. Bendu, and others, misappropriated public funds amounting to Three Billion Leones (Le:3,000,000,000) purported to have been used for the shipment and payment of customs duty for Toe Vehicles.  The matter was charged to court, and the trial is in progress. However, one of the accused persons, Madam Kipiatu Alghali, had pleaded guilty and was convicted and fined Three Hundred Million Leones (Le 300, 000, 000.00), and ordered to repay a restitution of Two Hundred and Twenty-Seven Million Leones (Le 227, 000, 000.00). The convicted person has paid a total amount of Five Hundred and Twenty-Seven Million Leones (Le 527, 000, 000.00).

2. MINISTRY OF INFORMATION AND COMMUNICATIONS (MIC) -- The Audit Report alleged that the former Permanent Secretary in the MIC; the Executive Director of SALCAB; and the Board Chairman SALCAB, jointly Misappropriated Three Hundred Thousand United States Dollars (USD$300, 000) meant for the construction of Cubicles for the Fiber Optic Project. Three (3) persons were charged to court; and two among them were found guilty, and ordered to pay a fine of One Hundred and Twenty Million Leones (Le 120,000,000), and Sixty Million Leones (Le 60, 000, 000) respectively. They have paid their respective fines.

3. BANK OF SIERRA LEONE (BSL) – The Audit Report discovered that the procurement of software (Oracle) for the Bank of Sierra Leone, worth over Five Million United States Dollars (USD$5m), was undertaken without following procurement procedures. ACC investigations established that proper procurement procedures were not followed through, with many causes for concern including retroactive approvals and failure to follow laid down guidelines on approvals. The software has been procured, installed, but not put in use yet due to challenges arising from contractual relationship and COVID-19 interruption.

However, there are various issues of official misconduct and abuse of office or position that are now under review by the Prosecutions Department of the ACC to determine if the said conducts of the former Governors, the Board of Directors and various staff of the Bank of Sierra Leone meet prosecutorial threshold for prosecution. The Public will be updated further on this in due course.

4. MINISTRY OF BASIC AND SENIOR SECONDARY EDUCATION (MBSSE) – The Audit Report alleged that withdrawals amounting to Three Billion Leones (Le 3,000,000,000) were made from the MBSSE’s Account. Nonetheless, there were no supporting documents for the alleged use of One Billion, Eight Hundred Million Leones (Le 1,800,000,000). The ACC has analyzed same, and obtained statements from the Senior Finance Officers that undertook several projects, but failed to report. Investigation into this matter is still in progress.

5. NATIONAL TELECOMMUNICATIONS COMMISSION (NATCOM) - The Special Technical Audit Report 2018 underscored that NATCOM made series of individual donations. ACC investigations confirmed that donations were indeed made to public institutions, groups, and individuals, upon request to undertake development projects. Some undertook the projects. Others did not. In this regard, the Commission has recovered a total of One Hundred and Fifteen Million Leones (Le 115,000,000) from the groups that failed to undertake the said projects. Additionally, two individuals have refunded the amount of monies donated to them. Meanwhile, investigation into this matter is still in progress.

The Commission shall continue to promptly update the public through releases on interventions made with regard the Auditor-General’s Audit Reports of Sierra Leone. Release No. 4 on the Audit Reports will be out in the following weeks.

Meanwhile, the ACC wishes to reassure the general public of its determination and commitment to protecting public property and revenue across the country at all times.

For further enquiries on this, please contact Moris Kanteh, Public Relations Assistant, on +232-78-832131 or via email info@anticorruption.gov.sl. 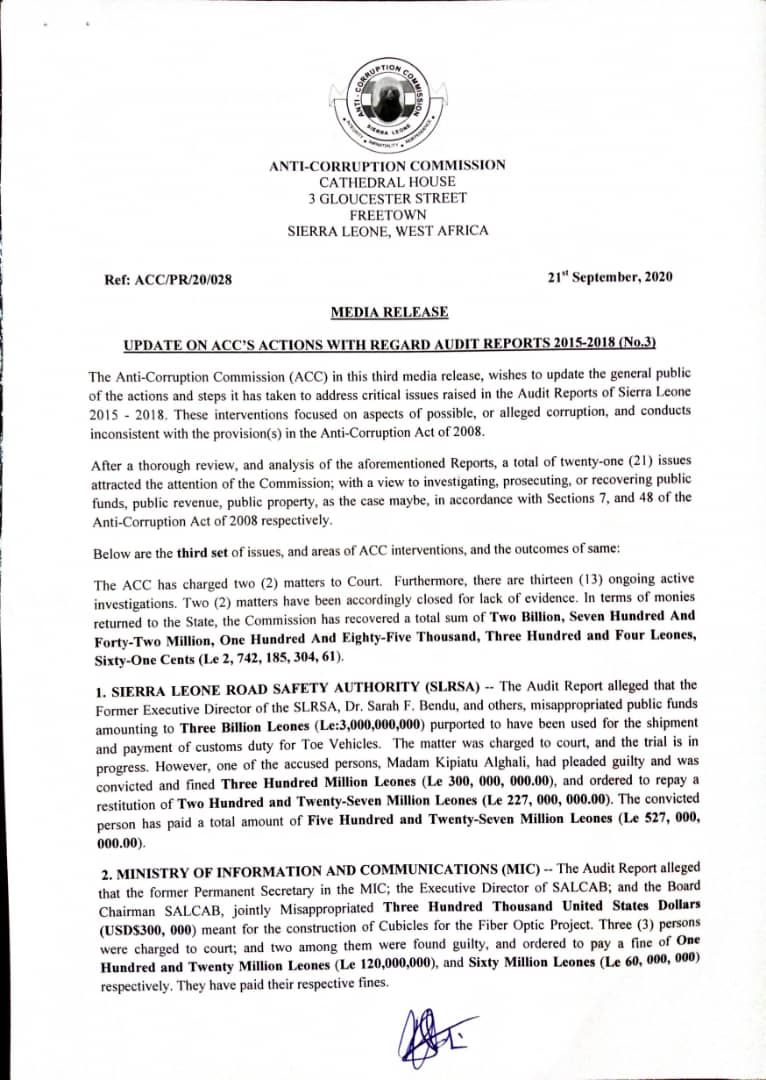 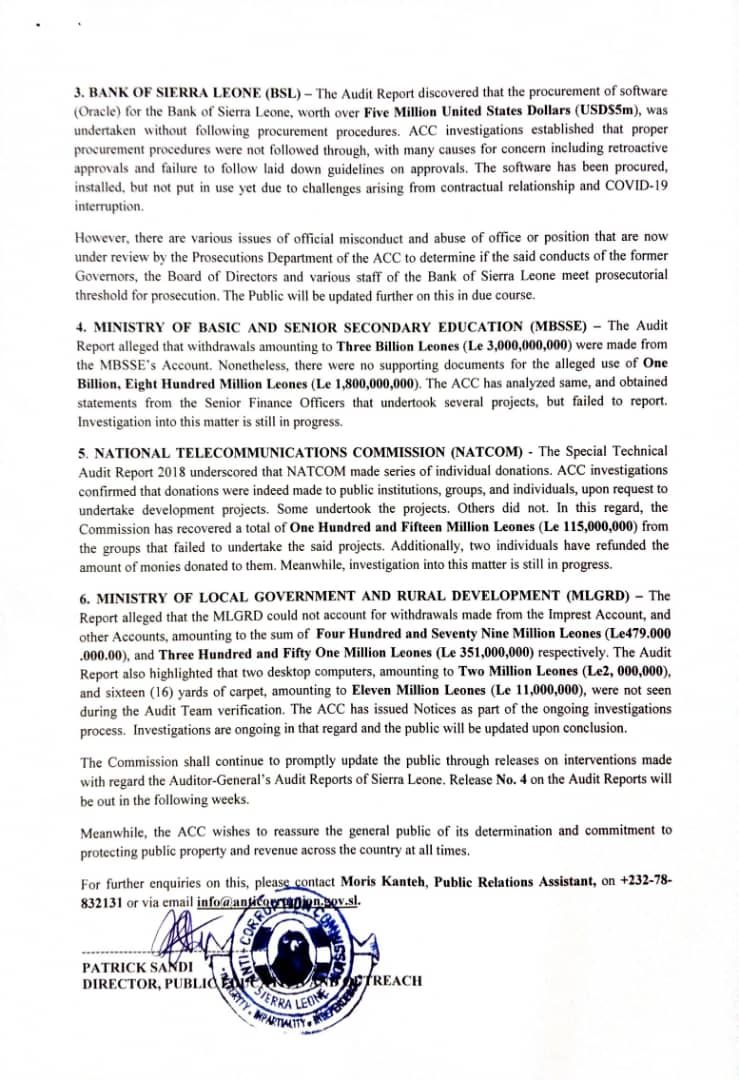