"WE SHOULD NOT TRIVIALIZE ISSUES OF CORRUPTION"-ACC COMMISSIONER

The Commissioner of the Anti-Corruption Commission (ACC) Ady Macauley on Wednesday 24th August 2016 told civil society members and public officials that the issues of corruption should not be trivialized. He made this statement in a symposium on the topic: Prosecuting Anti-Corruption cases and increasing citizens interest to track corruption offences, organized by the Campaign for Good Governance (CGG)  at the Civil Service Training college Tower Hill Freetown.

In a very passionate mood, the ACC boss stated that the Anti-Corruption Commission provides leadership in dealing with graft, and his vision is to transform Sierra Leone into a viable State that is socially and economically stable. He furthered that bribery and corruption were serving as serious hindrances to the development of the country, noting, there was no need to dichotomize typologies of corruption as all forms of corruption have debilitating effects on society. Mr. Macauley said with support from the UK Government the Commission is implementing the Pay No Bribe (PNB) campaign which seeks to improve on public service delivery with an anonymous reporting platform to map out corruption trends in the country.

The Commissioner emphasized, he will work with the office of the Attorney General and the Chamber of the Chief Justice to establish an Anti-Corruption Division within the Judiciary. This will increase the turnover time of anti-corruption cases prosecuted in the High Court, since there will be a pool of specialized anti-corruption Judges presiding exclusively on anti-corruption matters. "People must grow up with integrity and not learn from it later", he added.

In his presentation, the Attorney General and Minister of Justice, Joseph Fitzgerald Kamara ESQ.     , stated that in Sierra Leone corruption is celebrated, but that as a people we should be ready to fight against it.  He stressed that all and sundry must play their part in the governance cycle, as any blunder will impact negatively on the cycle .

He further said , there were challenges in the prosecution of anti-corruption cases, such as witness testimony, resistance to testimony, and the disappearance of vital documents of evidential value. He advised all citizens to take responsibility of the fight, resist, report and stand against it.

Briefing her audience, the High Court Judge, Justice Miatta Samba who deputized the Hon. Chief Justice Abdulai Charm, indicated that in the prosecution of cases two things come to play; gathering evidence, and getting and managing witnesses to support the prosecution. She further stated that the Judiciary appreciates the role of civil society groups, but advised that they should make positive criticism, and report accurately on court proceedings.

The Executive Director of Institute of Governance Reform (IGR) Andrew Lavali, representing civil society organizations, stated that there were administrative challenges to the fight against corruption and that corruption tracking should be sectoral and not individual.

Earlier, Chairman of the event, Ndeye Koroma Chief Executive Officer of the Millennium Challenge Corporation (MCCU), underscored that corruption thrives when there are no strong systems, and due to the culture of impunity. She however, emphasized that danger  ous acts like corruption must face dangerous consequences.

Questions, and concerns which were all responded to, formed the high point of the symposium. 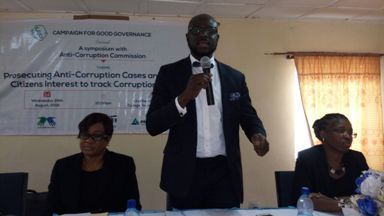 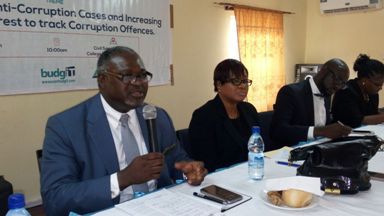