The Commissioner of the Anti-Corruption Commission (ACC), Francis Ben Kaifala Esq., has on Friday 16th April 2021, in a well-attended engagement at the Pujehun District Council Conference Hall, Pujehun District, explained to the people of the District, the meaningful strides made by the ACC to launder the image of Sierra Leone, which had suffered under the yoke of being described as one of the most corrupt countries in the World.

This engagement signaled the continuation of the Commissioner’s ‘Meet the People Tour’, which had commenced in February 2021 with Kabala, running through to Moyamba, Mattru Jong, Bonthe-Sherbro Island, Magburaka, Mongor-Bendugu, Kamakwie, Kambia, Kono and now Pujehun.

In his statement, Francis Ben Kaifala said, the engagement was a testament of ACC’s desire to re-energize public participation in the fight against corruption. He emphasized that, all leaderships must seek for FEEDBACK, and there is never a bad feedback. What you do with the feedback is what is important. Mr. Kaifala further stated that among the many reasons why our country’s growth is slow in the midst of plenty natural resources-is corruption. He said corruption deprives the underprivileged majority from accessing quality social services.

The ACC Czar outlined a number of actions the Commission has employed to tackle corruption head-on, such as; sustained and heightened public education activities, systems and processes reviews of Government Ministries, Departments and Agencies (MDAs) to eliminate monopoly, incentives and opportunities of corruption that exist, increased investigations and prosecution of corruption cases and non-conviction based asset recovery.

Commissioner Kaifala, further, highlighted Sierra Leone’s performance in international indexes, since he assumed the leadership of the ACC. The Afro Barometer Corruption Perception Survey 2020 stated that, corruption level in the country has declined from 70% in 2017 to 40% in 2020.

‘This is no mean feat, and it is important to note that such data are put together by independent and reputable institutions. We are performing exceptionally well in the fight against corruption as we have recovered over 30 Billion Leones of stolen public funds’, the Commissioner added. In fact, these gains made in the fight have earned me laurels and recognition by the United States Government as International Anti-Corruption Champion, and the landslide victory on my election as member of the Africa Union Advisory Board on corruption, whilst I remain the President of the Network of Anti-Corruption Institutions in West Africa (NACIWA) Mr. Kaifala averred.

He furthered that, through the concerted and shared efforts of the Commission and the public to expose the corrupt, Sierra Leone has taken back its rightful place amongst serious nations in the World. He re-affirmed the Commission’s commitment to protect the interest of all Sierra Leoneans by ensuring that duty bearers are held to account noting, any breach of public trust by circumventing the regulations for personal gain will not be compromised. Mr. Kaifala encouraged public sector workers to refrain from illegal practices that undermine the attainment of quality education and other development-related programs because the Anti-Corruption Act of 2008 as amended in 2019 does not romance with rogues, and that issues of integrity, transparency and accountability are non-negotiable.

Earlier, whilst welcoming the Commissioner and his Team to Pujehun District, the Paramount Chief (PC) of Pejeh Chiefdom, Sheku Koroma, said, the Paramount Chiefs were pleased to host the ACC Commissioner and his Team in the District, noting that, such engagement and education will serve as guide to the proper implementation of their programs and would enable them to introduce reforms that will improve on the delivery of services to their people.  Chief Koroma catalogued some constraints they facing in their chiefdoms, notably, the non-payment of Local Court Chairmen and Clerks for the past six months-as it was a recipe for corruption. He however, on behalf of his colleagues, assured the Commission of their fullest cooperation, and to cascade anti-corruption messages to their people in the respective chiefdoms.

Speaking on behalf of the Civil Society Organizations in Pujehun District, Ibrahim B. Swaray, Chairman of the Consortium, commended the Commissioner for his efforts to reach out to the people of Pujehun and convey anti-corruption messages stressing that it is a novelty.  He registered their commitment to working with the ACC since one of their roles is to monitor the implementation of development programs and projects for the benefit of the citizenry and report any suspected incident(s) of corruption to the Commission.

Station Manager Radio Wanjei, Abu Bakarr Mustapha, who represented the Media said, as a watch-dog body they will continue to draw public attention to the ills in society, and will inform the appropriate institutions in order to institute the needed actions to address the situations. He appealed for the revitalization of the Media Alliance Against Corruption group, which has been defunct, so that their diverse individual efforts will be coordinated towards the fight against corruption.

Chairman, Pujehun District Council, Skeku Sidi Sowa in his remarks as Chairman of the event, assured the Commission that his Council will continue to take the appropriate measures to address systems weaknesses and comply with laws and regulations relating to the proper, effective and efficient management and utilization of public and donor funds.

Presentation of copies of the March, 2021 Edition of ACC Newsletter ‘The Eye’, by the Commissioner ACC, to the Chairman, Pujehun District Council formed part of the engagement. 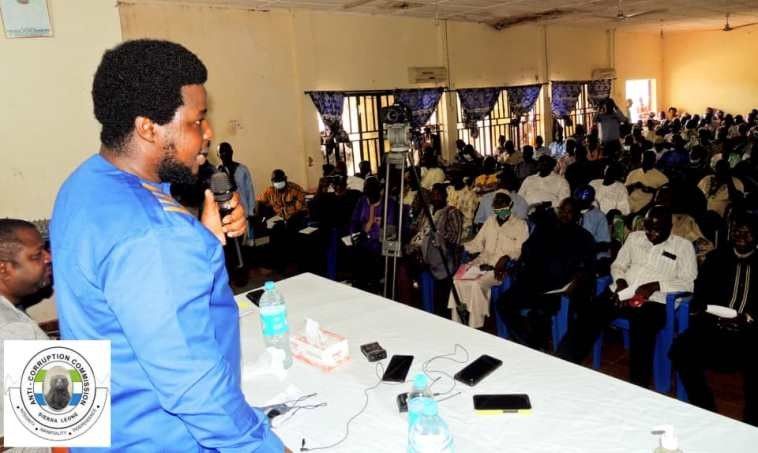 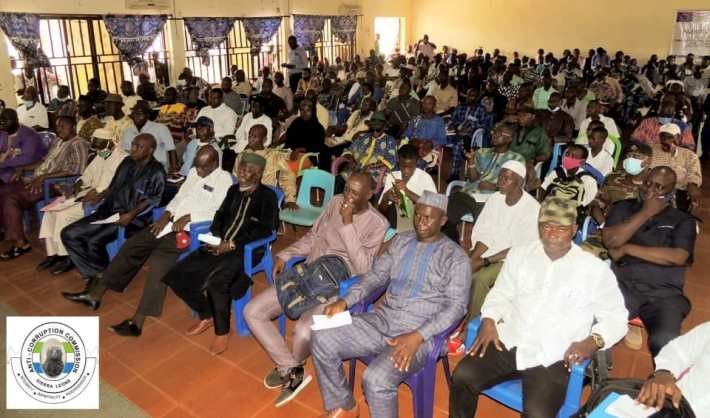