The ACC Commissioner led all the rounds of voting, including the fourth and final rounds, where he emerged as the sole candidate for the two-thirds statutory majority vote of 47 (full unanimity).

While responding to his election, Commissioner Kaifala expressed thanks and appreciation to the Government and people of Sierra Leone, especially President Bio, for the confidence reposed in him by nominating and supporting his candidacy. He also singled out the Minister, Hon. Nabeela Tunis and Ministry of Foreign Affairs and International Cooperation, and Sierra Leone’s Ambassador to Ethiopia, H.E Adekunle J.M King, and his Addis Ababa team for the support given to him during the campaign and electioneering process considering the short period of notice Sierra Leone received. “We know our robust measures in combating corruption in Sierra Leone is making us a model for the fight against corruption in Africa, so I believe this election is a testament to this,” the Commissioner stated.

The mandate of the Advisory Board “is to promote and encourage the adoption of measures and actions by State Parties to prevent, detect, punish and eradicate corruption and related offences in Africa as well as to follow-up on the application of those measures and submit a Report to the Executive Council on a regular basis on the progress made by each State Party in complying with the provisions of the African Union Convention on Preventing and Combating Corruption”.

Hon. Francis Ben Kaifala will continue to serve as Commissioner of the ACC, while serving in the African Union Advisory Board on Corruption with its Headquarters in Tanzania.

The Commission wishes to reassure the general public of its determination to ensure that the fight against corruption continues to launder the image of the country and to ensure sincere accountability at all times, in a bid to make Sierra Leone an enviable reference point for the campaign in Africa and the World. 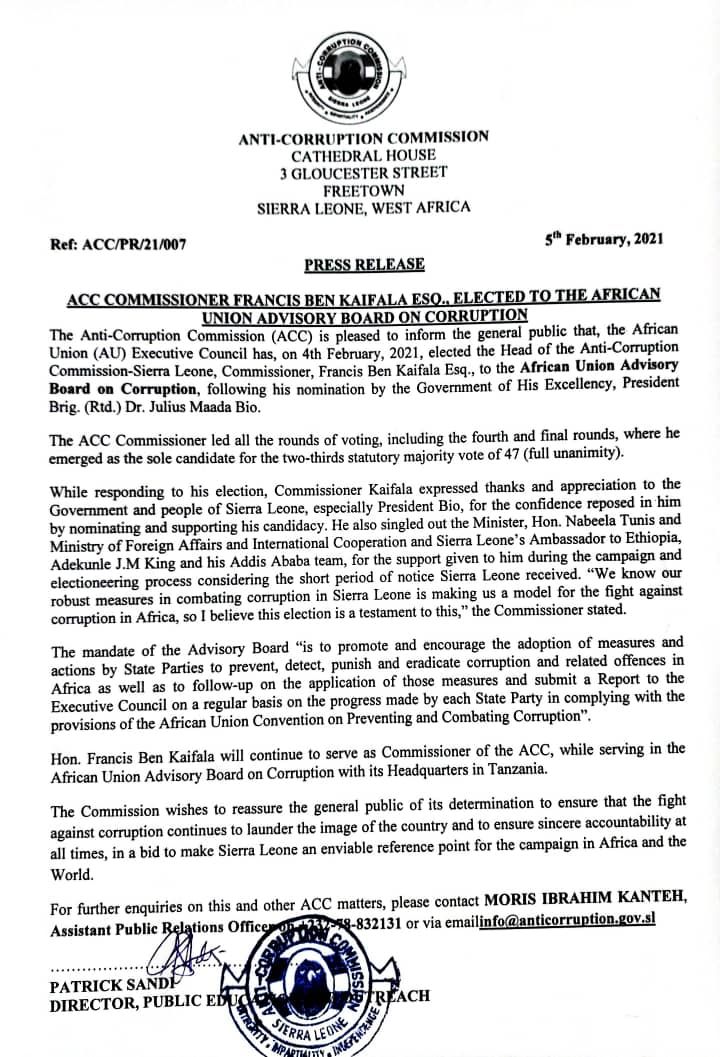